What is Benjamin Netanyahu's worldview

The Prime Minister's brother explains in detail why he stays very far away from the politically left spectrum in Israel. 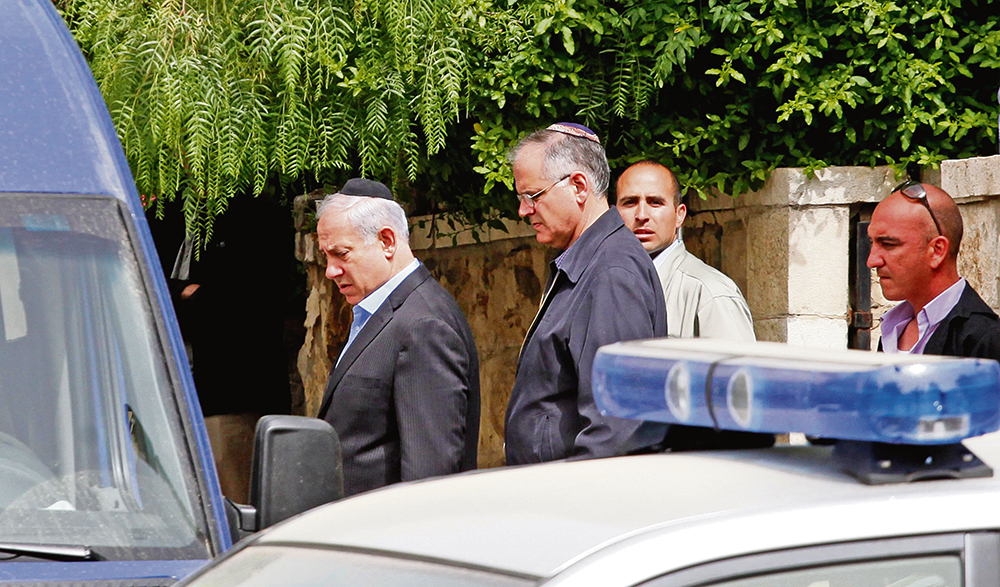 Benjamin and his younger brother Iddo Netanyahu mourn their father, who died in 2012 and turned 102. © GALI TIBBON, AFP

By Daphne and Iddo Netanyahu

Iddo Netanyahu is an Israeli author, playwright and radiologist. He is the younger brother of Israeli Prime Minister Benjamin Netanyahu and of Jonathan Netanyahu, who was killed in Operation Entebbe in 1976 (in 1976, Israeli passengers were taken hostage and threatened with death by German left-wing extremists on board an Air France plane; they were freed from the Israeli elite unit Sajeret Matkal, in which Joni Netanyahu also served as a captain; he was the only Israeli who died in this operation - translator's note)

Iddo Netanyahu spent part of his childhood and youth in the USA; In 1973 he dropped out of Cornell University to fight for Israel in the Yom Kippur War. He has a doctorate in medicine, but still devotes his time to literature; his plays are performed all over the world.

His wife Daphne is a lawyer, founder and editor-in-chief of the Israeli online portal “Mara” (“Spiegel”).

In the article below, Iddo and Daphne Netanyahu explain how they justify their socio-political position.

Why are “the Right” right? Because while the left are utopians, the right are realists. For the left there is nothing less than changing all of human nature. The right, on the other hand, understand that such a change would not only be impossible, but also enormously dangerous; communist regimes around the world provide ample examples of the brutal criminals with which such a change comes. In addition, this would not be desirable because the positive gifts and characteristics of human beings such as creativity, independent thinking and independence can develop and flourish solely through a free, sensible policy. It is precisely these attributes that the left usually pursue because they see them as a danger.

Left utopianism makes it possible to ignore the complexity of reality on many levels. This creates the dichotomous method of dividing the world into two camps - “ours” and “the enemies”.

The left see their ideology not only as a means of promoting the interests of their camp, but primarily as a political sentiment that is above all and everything, and in doing so position themselves as highly moral, progressive and downright enlightened people. Ergo, anyone who disagrees is a vicious, immoral, corrupt person. In their dichotomous view, the left does not see the right as political opponents whose ideological standpoints are wrong, but rather underexposed, insane, unscrupulous enemies. From this point of view, the left declare their intention to mobilize the whole of society for the political annihilation of the right.

In contrast to the left ideology, the right worldview is based on a realistic view of the political processes in the state. To achieve their goals, the right-wing focuses on the desired, useful steps that are the least painful. These goals are realistic and mostly result from compromises that arise between the conflicting interests. The right generally accept human nature and its desire to exist in social systems such as family, society and nation. The right worldview considers it possible that the political leaders - with all the inadequacies of human nature and with the idea that the decisions are made by various political parties, the majority of which they cannot control - that these politicians in their assessments and Suggested solutions are not always free of errors. Nevertheless, it does not turn them into criminals, but in the worst case only indicates their incompetence.

The situation in the left camp, however, is quite different. Left ideology, drawing its strength from utopias, becomes a sacred idea. And a sacred idea cannot be flawed! There are no mistakes on the left - neither in Israel nor anywhere else! It is always “the others” who make the mistakes, even if this “other” is life itself, which cannot be subordinated to an ideology. The glittering utopia is sacred, so it is not permissible to recognize your own mistakes with a sober look. This loyalty to one's own ideals is so deeply anchored that it no longer matters how often reality overtakes and disturbs the left. They will seek the way out over and over again - betraying those who are forced to pay again for their mistakes. In the history of the State of Israel, leftists had imposed the idea of ​​"equality" on us; with the result that a creative people degenerated into a poverty-stricken society. Only one thing counted: “Socialist ideals” should prevail. Decades passed before the right came to power and began to loosen socialist manners and customs, thus bringing about the free market economy and with it economic growth and prosperity, and triggering innovation-based progress.

Here the contrast to the “progress” propagated in left ideological circles is particularly strong. If the power structures and various spheres of social life are gradually freed from the ubiquitous presence of bureaucracy, this strengthens the confidence of power in relation to the creative potential of the individual, and should this get a suitable opportunity, it could also reach the moon ...

At the time, the Israeli left “decided” that Arafat, of all people, who always called for the destruction of Israel, was the right partner in the peace negotiations - in so far as it was understandable as it was a question of “peace” that had sprung from a left-wing fantasy. The fatal consequences of the Oslo Agreement resulting from these negotiations cost the Israelis dearly: over a thousand killed and several thousand wounded were to be lamented.

The left called for a withdrawal from Gaza

Continuing to consistently ignore reality, the left brought Israel another “peace” with Gaza: Gaza's Arab population would of course want to live in peace as soon as Gaza became “Jew-free”! .. What followed is well known: thousands upon thousands of rockets , Explosive balloons, etc .; the price of a utopia. The left has so far refused to take responsibility and refuse to recognize the connections between the seizure of power by the terrorist organization Hamas and the withdrawal from Gaza initiated by them. What is more, they go so far as to claim that the right-wing government is also to blame for the consequences of the withdrawal.

In their superficiality, they propose simplified solutions for eliminating the problem that they themselves created. This should be a warning for all of us: The left do not learn from their mistakes, because the complex, constantly changing reality is of no importance to them. They deal with an invented “reality” that can be forced into its ideological formula, no matter what the cost.

Another utopia allows the left to use itself for the separation of the state of Israel from Judea and Samaria. This time it is called "two states for two peoples"; a utopia that has not even been "modernized" in view of the fundamentally changed situation in the Middle East.

Today Syria is in a civil war, Jordan has changed its policy on Judea and Samaria, the Arab states are turning away from Machmud Abbas and starting to establish ties with Israel - primarily thanks to the politics of the right-wing head of government. The US President also recognizes both Israel's sovereignty over the Golan Heights and the ability to change the borders according to the results of the Six Day War. So again reality refuses to follow the utopian left fantasies. ...

If life in the country differs from the ideas of the left, i.e. if it is not ideal, it is, in their opinion, terrible and unacceptable. In these circles there is hatred of the right-wing rulers, who are not alien to reality and therefore reject left axioms, but improve everyday life in Israel and the status of Israel worldwide. The left despise right-wing voters and do everything to divide society - because only they are the natural representatives of "Enlightenment and social justice"! The moderate left refuses to acknowledge all the positive changes in the country over the past few years; the “post-moderates” talk about emigrating because life in this state is not worthwhile if their moral standards are not put into practice.

In contrast to left-wing parties with their unworldly ideas, which repeatedly cost the state dearly in economic, political and military aspects, the political right in their worldview is of the opinion that neither human nature nor our world is perfect. They too have hope, but this is a hope for something that can be achieved through incremental improvements and further developments; and take care to cause as little damage as possible and to allow maximum freedom.

It is the achievements of the right that, like thousands of witnesses, explain why we belong to the right and not to the left.