Russia has no internet

No pictures, just dry legal texts. The Internet site "zapret-info.gov.ru" of the state IT control authority Roskomnadzor looks unspectacular. Since November 1st, anyone can check a database there to see which websites have been blocked by the Russian authorities. Some observers already speak of the database as a "black list". The popular site "lurkmore.to", which describes itself as a humorous encyclopedia of modern culture, folklore and subculture, was temporarily blocked. The reason given by the authorities was that the site glorified drug use. After violent protests, the lock was lifted. 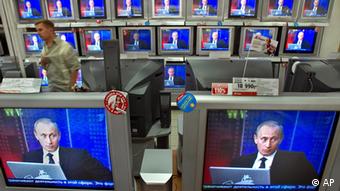 Russia's television has long been under Vladimir Putin's control

The "black list" is only supposed to name websites with content that is harmful to minors - in line with the new law on the protection of minors that President Vladimir Putin signed this summer. The law aims to help ban child pornography, drug trafficking and instructions on suicide from the Internet. "We have the right to protect our children," Putin said in a television interview.

Protection of minors only as a cover?

But the new youth protection law is controversial. The German Bundestag also expressed concern. The introduction of a "black list" threatens to create an "instrument to restrict freedom of expression and extensive censorship on the Internet," according to a proposal by the governing coalition that was passed last Friday (November 9th, 2012) with votes from the Greens. Chancellor Angela Merkel is urged by the MPs to advocate more rule of law, democracy and the observance of human rights in Russia during the German-Russian consultations with President Vladimir Putin. This should also cause discussions at the 12th German-Russian civil society forum "Petersburg Dialog", which begins on Wednesday (November 14, 2012) in Moscow. Because freedom of information on the Internet is one of the topics of conversation.

The Youth Protection Act provides for Internet blocking. Opposition sites could also be blocked if their IP addresses are linked to websites that are classified as dangerous. This is what happened to the well-known blogger and Kremlin critic Alexei Navalny, for example. Access to his website, on which he denounced abuse of power by the authorities, was blocked for hours in July 2012. The reason given by the internet provider: Nawalny's site had the same IP address as an extremist site.

Response to the protest movement 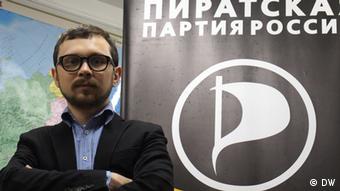 "Basically, a mechanism for censorship on the Internet is being created," says Pavel Rassudow, chairman of the Russian Pirate Party. For him, the "black list" is the government's response to the protest movement critical of the Kremlin. Western experts like Florian Töpfl, who is researching a project on the Internet in Russia at the London School of Economics, see it similarly. "I consider the law to be a very small piece of the mosaic in the process of restricting civil liberties and the freedom of action of opposition groups in Russia," says Töpfl. The government in Moscow has "tightened the reins" since the parliamentary elections in December 2011, according to the expert.

The election to the Russian State Duma was overshadowed by allegations of fraud and triggered a wave of protests against Putin. Following the presidential election in March and Putin's return to the Kremlin, freedom of assembly in Russia was restricted and regulations on non-governmental organizations tightened. The authorities are investigating several opposition activists. 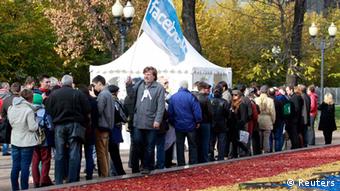 The Internet is of particular importance to the Russian opposition. Because unlike state-controlled television, the network in Russia is "relatively free", states the US organization Freedom House in a recent report. There is no clear political censorship.

That is why it is possible to organize protests against Putin mainly via social networks such as Facebook. In October, for example, the opposition movement used the Internet to elect a coordination council. Around 70,000 users took part in the online voting. "I believe that the Internet is very dangerous for Putin and his regime because it is the opposition's communication space," says Florian Töpfl.

Putin promises that Internet freedom in Russia will not be affected. The 60-year-old president admits that he rarely uses the Internet himself. The Russians, on the other hand, are doing it more and more often. According to the International Telecommunication Union (ITU), every second person in Russia had access to the Internet in 2011. According to surveys, more than 90 percent of young Russians are regularly online.

Whether pirated copies of films, extremist propaganda or pornography - all of this can be found on the Russian Internet with just a few clicks. "This freedom will have to be restricted in a certain way in the next few years," says Töpfl. The only question is how far the web as a platform for political opinion will be affected. "This whole process of the 'black list', this coordination between the state and the providers, could easily be applied to political content later because the infrastructure would be in place," warns the expert.