Why do some people not accept empathy

The 7 most common empathy mistakes and how to avoid them 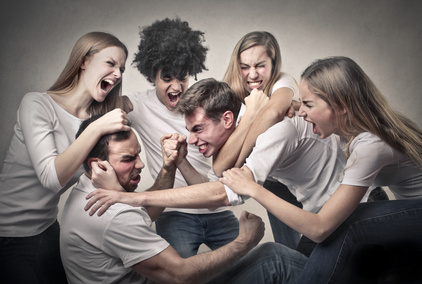 These 7 empathy mistakes often lead to conflict - do you make any of them?

More and more people value empathy as a helpful skill. The topic is taken up more often in the media and empathy is also becoming increasingly important in HR departments and executive suites. However, the increased attention of the mainstream also leads to inaccuracies and strong simplifications, which often lead to errors and misjudgments. In this article I am therefore introducing you to the 7 most common empathy mistakes and giving you valuable tips so that you can avoid them.

The 7 most common empathy mistakes

1. Empathy Mistake: Empathy means doing what the other wants

Sometimes when someone does something that is obviously against the interests of another, the accusation is raised "But that wasn't particularly empathic". This accusation is intended to make you rethink your actions and adapt them to the wishes of the other. You are accused of either not understanding the needs of those around you or of even ignoring their desires. You are portrayed as socially incompetent or mean and can only escape this if you subordinate your behavior to the wishes of your counterpart.

To avoid this empathy mistake, the most important thing is that you recognize it. Realize that someone is trying to manipulate you, disguised as an empathy apostle. In fact, if you are in a group, you may want to explicitly deny his unjustified accusation. Make it clear that your accuser will not fulfill all of your wishes either and that there are other aspects besides their sensitivities that must be taken into account. Don't be blackmailed. Take into account the wishes of others, but behave as you see fit.

2. Empathy mistake: Use empathy as a reproach instead of acting empathically yourself

This empathy flaw is the opposite of the previous one. People who make this mistake often have a relatively high level of empathy and are more socially minded. However, they ignore the fact that the other person is different from them. Some people have so little empathy that they seldom correctly recognize interpersonal signals. There are also people who prefer to be confrontational rather than cooperative.

If you want to avoid this mistake, you have to accept the quirks of less empathic or very confrontational people. I don't mean that you should put up with everything, but that you have to acknowledge reality. If you want someone to change their behavior the way you want, you have to adapt to them. Save yourself your grumbling or pleading that the other should please show a little more empathy. Rather, use your own empathy and communicate with your counterpart in a way that suits their needs. Does he only respond to strength? Then be ready to face a conflict. Doesn't she understand what's going on inside you? Then stop subtle hints and be honest and direct about what is bothering you.

3. Empathy Mistake: Empathy is for wimps

Empathy is often associated with terms such as understanding, warmth, and forbearance. People who would rather describe themselves with words like assertiveness, objectivity and goal orientation see empathy more as a sign of weakness than as a useful ability. However, empathy not only plays a central role in comforting, harmoniously dealing with the family and in resolving conflicts. Even when negotiating, selling, in power struggles and in managing employees, empathy is crucial for success.

Empathy means that you understand what is going on in another, what wants, needs and dislikes he has and how he is feeling right now. With this knowledge, you can better adjust to others. With empathy you achieve a deep understanding and can react to moods and desires that you would otherwise not be aware of. You can avoid unnecessary conflicts, reach others better and motivate them more easily. So empathy does not mean that you always have to give in, just that you know more about the other person.

4. Empathy mistake: Empathy cannot be learned, it is innate

Empathy is inherent in every human being and also in many other living beings. It is therefore not wrong to say that empathy is innate. Of course, different people have different requirements. The level of empathy is determined by both genetics and upbringing. People with psychological disorders (e.g. autism or psychopathy) sometimes even have a completely different way of feeling empathy than the average citizen.

Regardless of this starting position, however, everyone can increase their empathy. If you have low empathy and want to change this, don't be fooled into thinking it is impossible. Okay, maybe your empathy isn't reaching the level of a Machiavelli or Mother Theresa. In any case, you can achieve a noticeable improvement in your skills in everyday life. For some empathy training methods, this has even been scientifically proven. If you want to increase your empathy, there are some helpful links at the bottom of this article.

5. Empathy Mistake: Believing that you have too much empathy

In fact, it is primarily people who succumb to this error with a very high level of empathy. They are often very influenced by the feelings of others. When someone is angry, they want to calm them down and give in. When someone is sad, they want to support them emotionally and get so involved with them that they end up crying themselves. In some cases, the feelings taken over from others are so intense that the person concerned can no longer even distinguish whether what he is feeling comes from himself or from others.

If this applies to you, then you have a very high level of empathy. People who are heavily influenced by it sometimes wish to have more average empathy. The problem, however, is not too much empathy, but too little competence in the sometimes difficult handling of a very high level of empathy. Learn to distinguish which emotions originate from others and which originate from you. Basically, everyone has to solve their own problems. Realize that you are not responsible for everyone else. Be aware of other people's emotions, but don't just base your behavior on them.

People with low self-empathy don't know what they really want or why they feel good or bad. Sometimes they have problems distinguishing whether their feelings arose from themselves or whether they took over the feelings of others. For people with a very large deficit in the area of ​​self-empathy it is sometimes even impossible to perceive their own feelings and to name them correctly.

There are a lot of reasons for that. Perhaps you see emotions as something negative, as they keep people behaving unreasonably. Perhaps you are also a very matter-of-fact person who is strongly based on facts and who has little to do with feelings. But it can also be that you orientate yourself too much towards others and do not give your own feelings the importance they should be.

Practice introspection. Find out what is really important to you. Where do you want to go? Which behaviors do you no longer want to tolerate? Get to know yourself better and increase your self-competence.

7. Empathy Mistake: Empathy means putting yourself in someone else's shoes

When I wonder how I would think, feel, and act in someone else's situation, I can understand what is going on within them. None of the empathy errors presented here are as common as this one. Even people with a strong knowledge of human nature tend to do so. Understandable, because at first glance this doesn't seem like a mistake, but more like a general piece of wisdom.

Unfortunately, this well-intentioned advice is based on the false premise that all people are essentially the same. When you have to give a lecture, some people think: “Oh no, so much attention. What if I get critical questions? " and others say: “Yeah, so much attention. I can use that to distinguish myself and show off my knowledge. " There are also people who would betray their ideals for money or careers (keyword: "moral flexibility") and others, like Snowden, who did it the other way round.

Still, the good thing about this empathy mistake is that it prompts you to think more about the other person's point of view. But if you really want to understand what is going on in someone, you should not try to find out what you would do in their situation, but rather ask yourself which ways of thinking and behaving are typical for them in their situation.

You now know the 7 most common empathy mistakes. Some of them can already be avoided by being aware of them. Sometimes, however, a more intensive study of the subject of empathy is necessary.

You may have noticed that some of these errors originated from a misunderstanding of the terminology. With this empathy definition you can get an overview and learn to better differentiate between the individual dimensions of empathy. An incorrect assessment of one's own empathy can also lead to errors. With our free empathy test you can determine within 2 minutes how high your own empathy really is.

If you want to work on your social skills beyond the intellectual preoccupation with the topic, you should choose the training method that suits you best and that takes into account your individual strengths and weaknesses. If your problems are mainly in the area of ​​self-empathy or the distinction between your own and those of others, you should learn to listen to your inner self. Meditation is particularly suitable for this.

If your difficulties are more in dealing with others, I recommend the HUMM® personality model, as it allows you to assess others quickly and reliably and is still easy to learn and apply. The quickest way to learn the HUMM® is in our seminars. But even with our free offers (ebook and email course) you can already learn a lot about the HUMM® and use it for your benefit.

Of course, in addition to the HUMM® and meditation, there are also other training methods for empathy and emotional intelligence that are suitable for permanently increasing your soft skills.