Is Flanders field in France or Belgium

Every evening a delegation of the Belgian fire brigade marches at the Menen gate in Ypres to blow the horn signal "The Last Post", the English cone pond - in honor of the missing soldiers, in memory of the battles in Flanders. Every evening since 1928 people stop there, the traffic around the archway has stopped for a few minutes at 8 p.m.

Verdun in eastern France, the scene of one of the most terrible battles, is a veritable open-air museum of the war and its piebalds. The central location here: the Douaumont ossuary, which contains the bones of around 130,000 fallen soldiers and is in the tradition of a medieval ossuary. In September 1984, pictures of the ossuary went around the world: At that time, the French President François Mitterand and the German Chancellor Helmut Kohl spontaneously held hands at a memorial service in front of the Douaumont. That was 30 years ago. 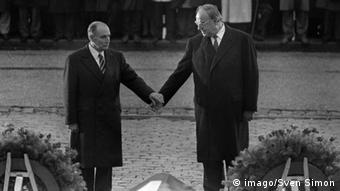 A sign of reconciliation: in 1984 François Mitterand and Helmut Kohl held hands in front of the Douaumont

Only now, at the centenary, has the name of a German soldier who fell before Verdun been immortalized for the first time on a plaque at the ossuary in stone. Until now, this honor was reserved exclusively for French soldiers. In the summer of 2014, France will experience an almost unmanageable number of small gestures and local commemorations - in addition to the semi-official commemoration for which the republic has been preparing for a long time.

In France, the First World War is called "La Grande Guerre", the great war - whereby the adjective "great" has a clear meaning in terms of politics of memory: as a patriotic reflection on the success and sacrifice of standing together in a military defensive struggle. "The First World War reminds us of how strong a nation can be when it sticks together," said French President François Hollande as a leitmotif. On the anniversary of the start of the war, on August 3, Hollande wants to meet the German President, Joachim Gauck, on the Hartmannsweilerkopf, a mountain range in the Vosges that was heavily contested. 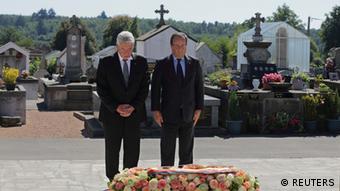 The current war debt debate in France has a comparatively weak response. In his study "Die Schlafwandler", the Australian historian Christopher Clark denies the thesis that Germany was solely responsible for the outbreak of war. The book is a customer in Germany, but not in France ("Les Somnambules"). The public there does not ask about the diplomatic preparation and the political blame, because France had to defend itself against attacking German armies on French soil.

It was no different in Belgium. And yet Belgians do not use the adjective "great" when they speak of World War I. The view of events in 1914 is comparatively sober; national-patriotic undertones as in neighboring France are almost completely absent. One reason for this lies in the shared memory: Walloons and Flemings each celebrate their own memory. 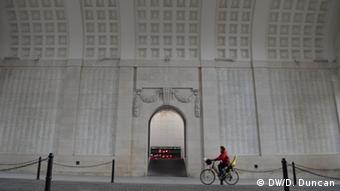 The Menen Gate in Ypres: The names of 54,896 missing soldiers are engraved

Francophones and Dutch speakers have been politically quarreling for decades, now a "front line" runs between the parts of the country even when looking back at history, states the daily "Le Soir". According to historians, the causes of the dispute between the Belgian ethnic groups go back to the First World War: the German occupation authorities had promoted efforts to achieve Flanders independence and a cultural detachment from the French-speaking part of the country.

At three Belgian memorial hours in Ypres, Liège and Brussels, Foreign Minister Didier Reynders wants to highlight his country as a "central place of remembrance". Central also because Brussels today as the seat of the most important EU institutions shows how far the reconciliation of the peoples of Europe goes. For the Belgian battlefields around Ypres, Belgium wants to claim the status of "World Heritage Site" from UNESCO. An initiative to be taken forward with France, with Paris taking care of the Somme memorials. 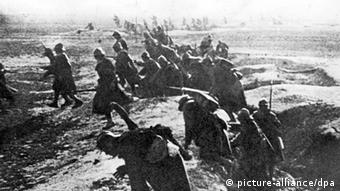 Synonymous with the war on the Western Front: Around 700,000 people died in the Battle of Verdun (February to December 1916)

France and Belgium also agree on another principle: the commemoration of the murderous trench warfare on the Western Front shows the Europeans the political obligation to get involved internationally. The French General Elrick Irastorza put this on record; As head of the French committee for the preparation of the official commemorations, he called the World War an "immovable milestone in memory", which of course now threatens to weather. It is all the more important to use the "centenaire", the "centenary", to show all those who doubt international military operations today that people from foreign countries also gave their lives in Europe, "so that we can live in a pacified Europe today be able to live".

However, the commemoration of the World War in Western Europe sometimes gets along without any pathos. From June 1st, runners from all over Europe will be on their way: They are planning a relay race that will lead from the Belgian Nieuwpoort on the coast to Strasbourg in France. Always along the previous front line with detours to memorials and monuments.