What was the oldest motorcycle you rode

from Kradblatt 9/19, by Wilhelm Stark 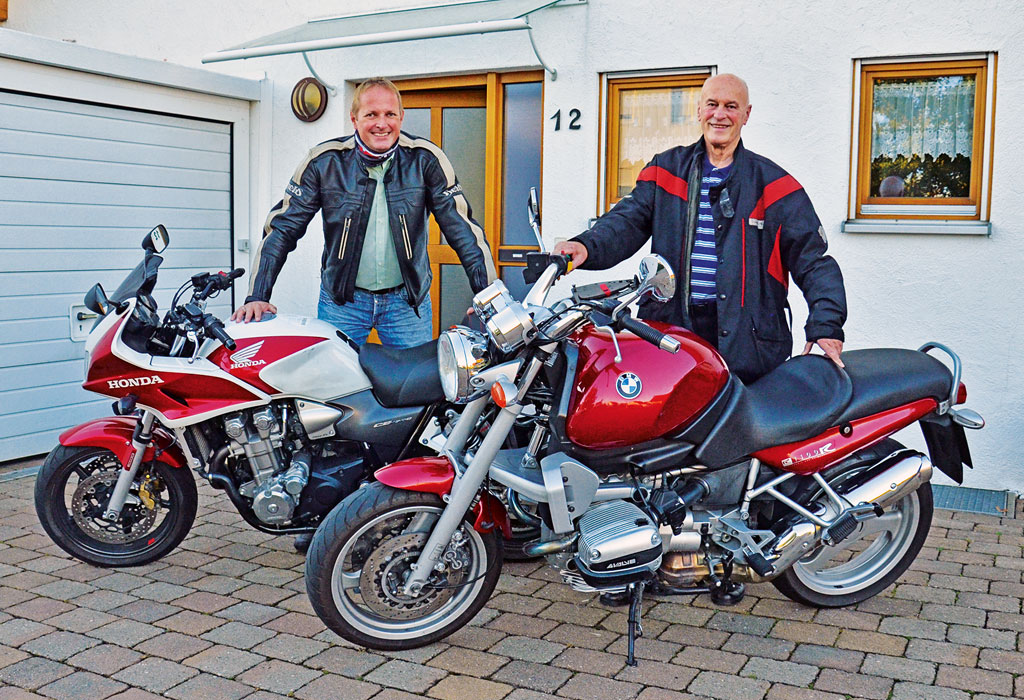 Max is mysteriously related to my wife around three corners. Somehow his wife is my father-in-law's cousin or something. In our village everyone is related to everyone in some way. For a new urban plant like me, the network cannot be seen through.

In addition, Max is 80 years old and still winds down his kilometers every day he thinks is suitable. He prefers to drive to the Café Diefenbach in Weil der Stadt, 20 kilometers away, early in the morning, drink his coffee and then drive back again. The 20 kilometers each way sometimes turns into 30, 40 or more. Spread over the year it comes to 5000 km. That is more than some young hopper unwind.

I made an appointment with him today. Max is sitting in front of his house in the rising sun and is putting the pharmacy shop to one side when he hears me approaching. He looks very satisfied and is enjoying the morning. I'm also happy and wonder if I'll be in the fortunate position of being able to ride a motorcycle at the age of 80. His wife Doris also comes to the door briefly to greet me. She is a lovable and happy woman. That means it suits him. When we are about to leave, she calls out to her husband to see if he has his scarf with him. Sure, he did. Does that annoy him? Nope.

Max drives relaxed, but you can see the routine of many years as a motorcyclist. He got his first driver's license when he was 16 and drove around in a Triumph BDG 125 for a few years. That must have been 1952 if I calculated correctly. Then a Goggomobil and other four-wheeled stuff came along and the two-wheeled career hibernated extensively. It wasn't until he was 40 that he took up the same again, this time in the person of a Honda CB750 Four. It started with his boss's wife always bringing him the latest MOTORRAD. She worked for the motor press and since her husband had nothing to do with these infernal machines, Max was provided with good material. Later he drove a Honda Hawk GT, according to Max "such a Revere with a chain". Last but not least, he arrived at his BMW R 1100 R, "because it has ABS". A grandpa motorcycle in Bordeaux red, as it is in the book. Almost in any case, an R 850 R in this same color would be even more grandpa-like. But it suits him, he's a grandpa too. The Four is still family owned. His eldest son has taken it over and she shares the garage with three other motorcycles.

In Weil der Stadt, just before the big waterfall that plunges into nothingness on the edge of the earth, we park our motorbikes in style in front of Max’s favorite café in the picturesque industrial area on the parking space for bicycles. Max examines my tires and I now expect a “Wow, no fear silence!”, But Max simply says: “You still have enough profile. I have to go to the tire dealer soon. ”Well then. 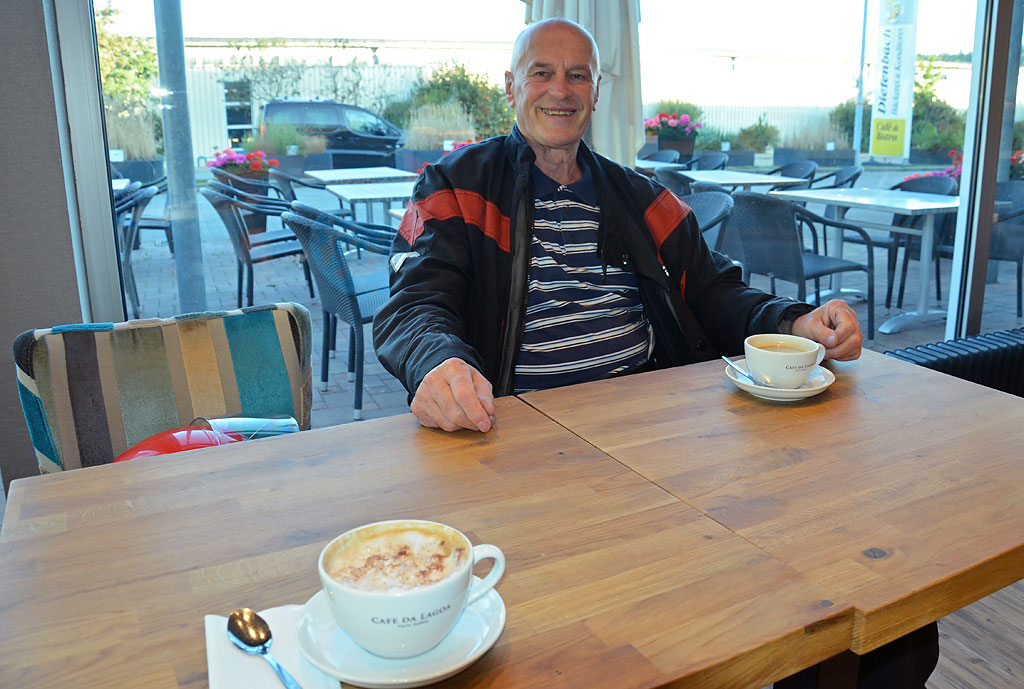 Over coffee we chat about this and that. It is noticeable that Max hardly talks about the past. He's alive right now and happy with how it is right now. If you ask him, he will tell you about the time when he was still working, but without sadness. Just as a report. Max is a painter and varnisher by training, but then switched to the field contactor of the city of Stuttgart. His career went very well, he was able to retire a few years earlier than planned and that’s it. Point! No hero reports according to the motto "The older I get the better I was" or something like that. Rather, he talks about when he last screwed, which oil he prefers to use, where he prefers to go and which café he likes to go to, albeit quietly behind the scenes. You don't want to make enemies here. 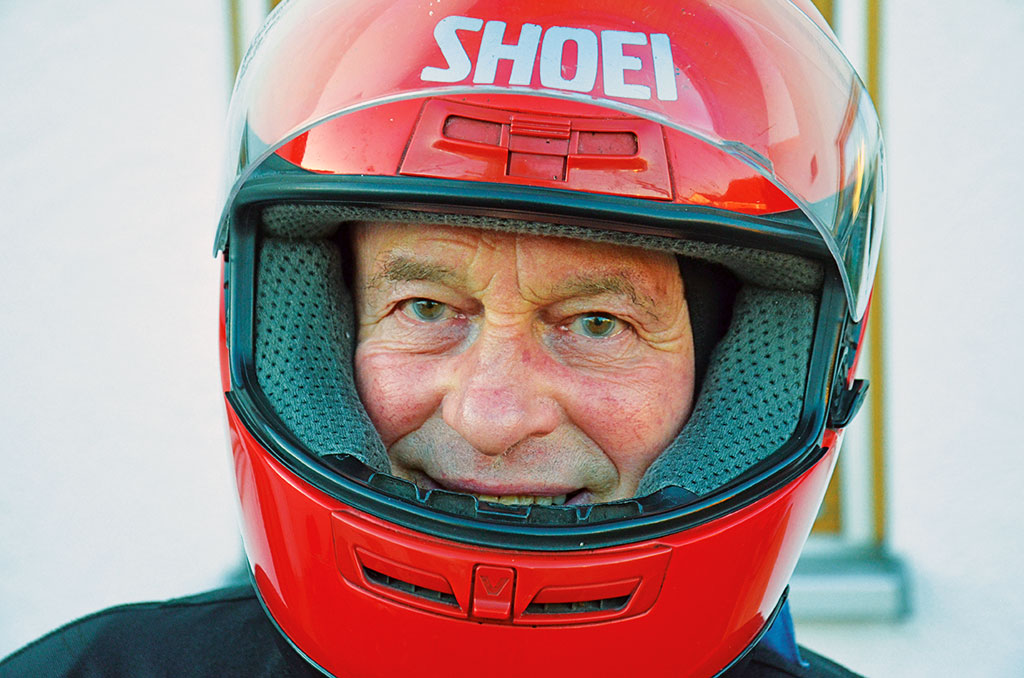 Nor do you hear stories from Max about niggles or who has just passed away. Everywhere he reports somewhat worried that it has been more difficult for him to get on his motorcycle lately. He doesn't want anything to do with a smaller, lighter motorcycle, he can't get that through with his wife. He drove one for many years. When his eldest son had his motorcycle license, the racy 67 horses were over. The first-born continued to do this, while Max was allowed to roll around with his 27-horsepower cucumber. But now there are wonderfully light motorcycles with a lower seat and ABS. I'll clarify that with Doris. A Harley would be appropriate for its age. Not easy, but the seat is low. OK, such a part is not produced under the Bavarian flag, but you don't want to be picky about the old days. And if I sell Doris so that such a heap of iron can't go that fast, there might be a chance.

Max seems to be a real coffee racer. He and his wife have a well-timed schedule of when to meet with whom in which café. But then they get into the car. Motorcycling is his domain, which he cherishes. Here he is for himself, with all his senses in the here and now and without distraction. Motorcycling is his daily fitness program and morning meditation in one, he tells me, a kind of yoga on two wheels. He swears by this medicine, like others perhaps by appetite suppressants, ginseng extract, colonic irrigation or adhesive cream. The success proves him right. That goes under the heading “Everything done right”.

After so much telling, we become silent for a while. I borrow his pharmacy shop and he gets the motorcycle magazine that I brought with me. His coffee with condensed milk has gone cold, as has my cappuccino. That's just how it is when men feel unobserved. Haven't done a crossword puzzle in a long time. Hmmm, another word for motorcycling that ends with "... eelenmassage". I have to ask Max, he does that a lot. He seems to like the FUEL. Especially the article about the racing vest. "It was very popular with us." - "It's back!" - "Oh, what." All said.