Strictly speaking, Vancouver Island, the elongated island the size of Belgium at the gates of Canada's third largest city, belongs to the metropolitan area of ​​Vancouver. Nevertheless, it would be wrong to simply tick them under Vancouver - Vancouver Island is a world of its own, in some places reminiscent of old England, but in places also of a reservation.

The way to Vancouver Island via the Strait of Georgia is not far - and yet it feels like a little trip around the world. During the 1 ½ hour crossing, the ferry slalom between the many smaller islands, orcas and dolphins often accompany the ships, even if only for a few seconds. On Vancouver Island itself, Victoria is the largest city - and capital of the province of British Columbia. On closer inspection, this is not surprising: Victoria is not only named after the British Queen of the same name, the city with its many Victorian buildings, the monumental Fairmont Express Hotel, the lovingly tended gardens and its red double-decker buses are more reminiscent of an English than a Canadian city. Most of the other cities and settlements on Vancouver Island are in the Comox Valley in the east of the island. No wonder, after all, the east coast is protected, while the largely uninhabited west coast is directly exposed to the influences of the Pacific. As a result, the west coast is also relatively strongly fragmented, over time five fjord-like sounds have formed. Although they are relatively difficult to reach by land, they are definitely worth a detour. Our tip: take a kayak tour through the sounds or rent a boat. A must just because of the wild, romantic, weather-beaten landscape and the whales that appear from time to time! 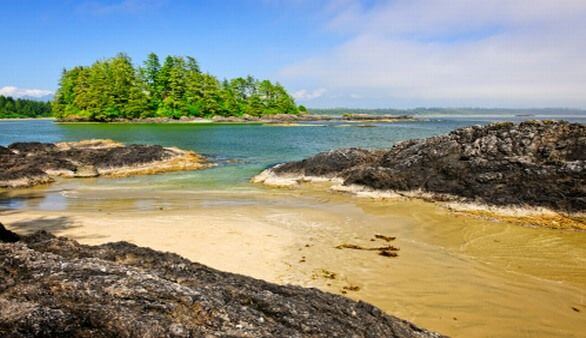 Vancouver Island is noteworthy for other reasons as well. For one, the island is home to numerous First Nations members who live in three large groups scattered across Vancouver Island. They still live their culture today, many of them have found an intermediate path between western lifestyle and preservation of traditions. Nowhere else in Canada can you find so many testimonies of the Indian way of life, as many cult and cultural objects as on Victoria Island. Anyone interested in the First Nations will find numerous “cultural guides” here who willingly tell about their tribe and its special features.

On the other hand, Victoria Island fascinates with a unique natural diversity and beauty that only leaves the viewer silent in amazement. The rainforest begins right behind the towns on the island, and the giant trees in the interior of the island are dominated by the summit of the 2,195-meter-high Golden Hinde. The mountain lies in the middle of the approximately 2,500 km² Strathcona Provincial Park and, like the 2,166-meter-high Elkhorn Mountain, the 2,129-meter-high Mt. Colonel Foster and the 2,093-meter-high Mt. Albert Edward, is permanently covered by snow. Which is all the more remarkable because the climate on Vancouver Island is surprisingly mild by Canadian standards. A trip to Strathcona Provincial Park is worthwhile not only because of the high peaks, but also because of the numerous rare animals that have found a home here. If you like, you can discover the park partly by boat, but especially on foot. With a bit of luck, elk and wolves, sea eagles and numerous other rare birds will show up. By the way, you can only get to the Della Falls on foot, the highest waterfalls in Canada at 440 meters, which are even higher than Niagara Falls in the east of the country.