What is the importance of Gibbs Helmholtz

The concept of entropy is also used in the important second law of thermodynamics, which can only be properly understood if one is also familiar with the first law. Therefore, the two main clauses are briefly presented here.

The energy of the universe is constant. Energy can neither be generated nor destroyed.

In science didactics, it is always important to say that it no energy producers gives. So if anyone wants to sell you an energy producer, that person has certainly earned the Nobel Prize in Physics. An "energy generator" that "generates" electricity from sunlight, for example, is not an energy generator, but an energy converter. The sunlight - more precisely the electromagnetic energy of sunlight - is converted into electrical energy - into electricity.

Now we come to the second law of thermodynamics:

Every energy transport and every energy conversion increases the entropy of the universe.

The consequence of this second law is unfortunately a bit uncomfortable for all of us. At some point, in several billion years, the entropy of the universe will be at its maximum, all galaxies and all planets will be destroyed, there is only one huge cloud of energy in which there is maximum disorder. But, as I said, it will take a few billion years, so we shouldn't get upset about it.

Now we come to a very important connection, namely the influence of entropy on chemical and biochemical reactions.

We take a beaker, fill it with cold tap water, measure the temperature, which is usually between 20 and 22 degrees Celsius, and then add a heaping teaspoon of ammonium nitrate to the water without stirring. By stirring we would add energy to the system, and we absolutely want to avoid that.

This test result is astonishing at first sight. It is an endothermic process that takes place completely spontaneously and voluntarily.

Most students expect an exothermic process to occur voluntarily. When I pour hydrochloric acid and caustic soda together, a lot of heat is released during the neutralization, and the process happens very spontaneously and very quickly. When heating magnesium tape, I first have to add some activation energy, but then the magnesium ignites and a lot of heat and light energy is released very quickly. But an endothermic process that happens spontaneously and voluntarily is very strange.

Why is the dissolving of ammonium nitrate in water an endothermic process?

I get asked that again and again by students. I explain it like this: In an exothermic process, a lot of energy is given off. When HCl is neutralized with NaOH, heat is generated and the beaker becomes noticeably warm. Burning magnesium actually makes it really hot.

If, on the other hand, the reaction vessel cools down, the opposite of an exothermic process must have happened, and that can only be an endothermic process.

At this point I always introduce the GIBBS-HELMHOLTZ equation in class: 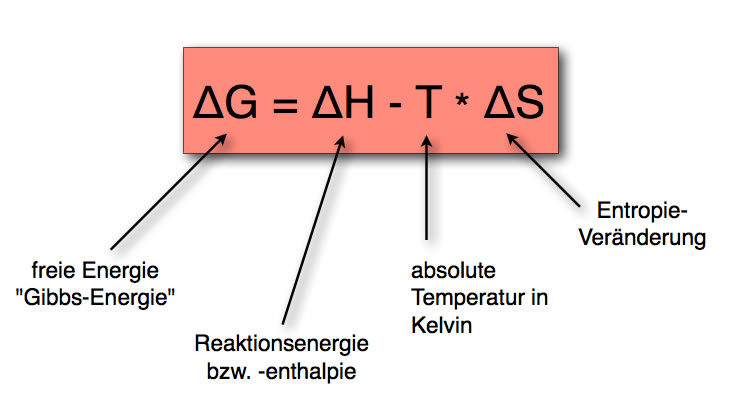 The most important things are already explained in the figure. The free energy ΔG, sometimes also referred to as GIBBS energy, is decisive for the spontaneous or voluntary course of a chemical or biochemical reaction. If this is negative, i.e. less than zero, the reaction takes place voluntarily. If ΔG is positive, however, the process does not run voluntarily, but "help" has to be given.

When dissolving ammonium nitrate in water it is ΔG obviously negative, otherwise the reaction would not take place spontaneously. But how can that be when we know that the reaction is endothermic, i.e. that ΔH is greater than zero?

The reason for this is the increase in entropy ΔS while dissolving the crystalline salt. In the solid state, ammonium nitrate consists of crystals. Crystals are highly ordered arrangements of ions; the entropy of a salt crystal is very small. When dissolving, this high order disappears; the dissolved ions move completely randomly in the solution, the disorder or entropy increases strongly when dissolving. So ΔS is quite positive. Now ΔS is multiplied by the absolute temperature and the product is then subtracted from ΔH. So if T * ΔS is quite large, then can ΔG become negative even if ΔH is positive.

Understand everything? No? Then again the version that everyone is guaranteed to understand:

An endothermic reaction can take place voluntarily if the entropy of the system increases significantly.

Oh yes, for processes where ΔGnegative The technical term exergonic was introduced. Correspondingly hot reactions where ΔGpositive that do not expire voluntarily, endergonic. Please do not confuse this with exothermic and endothermic!

Exothermic: A reaction in which ΔH is negative. This is where reaction energy is released. Exothermic processes are mostly voluntary.

Continue with "Entropy and Life"