How can robots be made polite?

"We shouldn't humanize robots too much"

Professor Nicole Krämer heads the social psychology, media and communication department at the University of Duisburg-Essen. Together with her team, she has investigated how people deal with human-like robots. Given the increasing automation in industry, this research is relevant to cross-industry areas such as logistics.

Professor Krämer, what are the results of your research?

We study how humans react to and interact with robots. For me it is always surprising to see what results these investigations lead to: When interacting with the machine, people behave like in interpersonal communication. So you are polite, speak clearly and smile when the robot smiles at you. 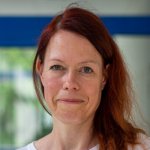 "People should always be aware that robots are machines."

What does that mean?

People cannot deny that they are social beings. As soon as a robot has visible cues, such as a face, that convey human resemblance on first impression, then people react accordingly. It is astonishing, for example, that the test subjects feel flattered when they receive a compliment from robots. People are not necessarily aware of this. It gets interesting when it comes to switching off talking robots. People react extremely sensitively to being addressed by the machine. They find it difficult to turn off someone who has spoken to them. That's not how you behave when interacting with other people.

Today, for example, robots are used in logistics handling centers. What are the consequences of your work for those who introduce robots in their everyday work?

Overview of artificial intelligence, its importance for logistics and possible fields of application within logistics.

You have to be very careful how much you equip robots with social cues like a human-like figure or a face, because strong stimuli can lead to confusing reactions in humans. This is problematic because robots are not living beings and should not appear that way. Sure, it's not a very big issue today, but it could be different in a few decades. From an ethical point of view, it is important that it always becomes clear that a robot is an artificial being.

How should people react to their machine colleagues?

People should always be aware that robots are machines. In a team, the perception of a robot depends on its autonomy and its capabilities. Because even the employees in the warehouse notice that robots are still stupid at the moment. They can't do anything but move quickly along the shelves and lift heavy things. Nothing works without human intelligence and control.

So far, everything has revolved around robots that perform tasks. What about the machine that stands next to the employee in the warehouse during the work break and offers a chat?

I don't think machines need such skills in the workplace. Employers don't want robots that take away working hours.
But the subject is very interesting psychologically. There are now many considerations for such companion robots that not only bring a glass of water, but also be available for small talk. From a psychological point of view, such skills help people without social contact. But we should make sure that the robot stimulates social interaction. In the nursing home or nursing home, this can mean that it not only signals to the elderly: XY is currently online, but then makes the appeal: Don't you want to skype with XY?

“Professor Nicole Krämer from the University of Duisburg-Essen warns that #Robots shouldn't look too much like humans. Otherwise it will be difficult to communicate. DB #Schenker #Automation "

What are you currently researching?

At the University of Duisburg-Essen, we are investigating how communication with robots changes the way people communicate with one another. It is also interesting to see how much information people need about which algorithms the machines use or how they function in some ways. This is a multi-year project that the VW Foundation supports. Basically, it's about the awareness of communicating with a machine. The question is: Does it help if machines explain more clearly what algorithms they work with, what skills they have and what happens to the personal data of human users? The latter in particular is often suppressed.

I have been researching human-machine interaction for 20 years and investigating non-verbal forms of communication. I am very interested in how people communicate and react when communication is different. We learn a lot about our social nature. And of course: if we understand people better, we can also improve robots.

Do you think that at some point interacting with a human-like robot will no longer differ from that of a human?

Axel NovakAxel Novak is a freelance journalist based in Berlin. For more than a decade he has been concerned with the logistics industry and the changes to which it is subject. Axel Novak writes for newspapers, magazines and companies.
<?