How can I immigrate to Nigeria

Read this article in English or French.

Grace Boateng (name changed) had imagined it to be easier. The 26-year-old from Ghana applied for a visa for the first time three years ago. "In the end it was said: Sorry, we cannot give you a visa. We are not sure that you will return to Ghana after the expiry," she said in an interview with DW. Grace, however, emphasizes that she met all the requirements. "I said, 'I showed you my bank statements, I have an apartment here in Accra, I have family here. What else do you want?"

But their objection was also rejected. Two other applications as well, according to her own statements, she only got the visa the fourth time. Grace believes that her origin was the reason. "Why is it more difficult for us Africans to come to Germany than, for example, for people from China or Australia?" She asks. 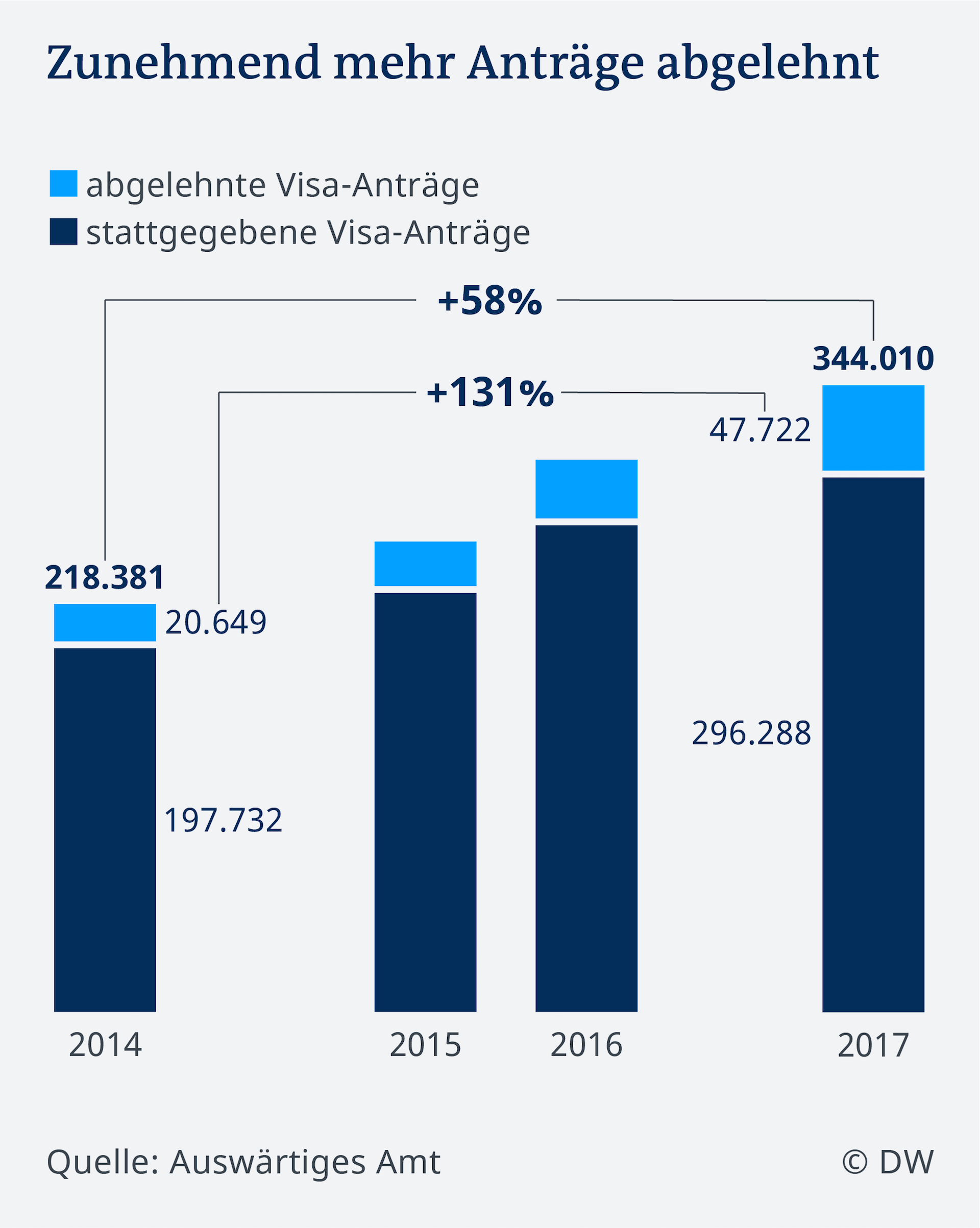 Grace Boateng isn't the only one who believes that. But is the accusation also true? In a data analysis, DW journalists evaluated the issuing of visas to German embassies between 2014 and 2017. In doing so, they looked at national visas, i.e. applications for long-term visas for study purposes, work or family reunification. So-called "Schengen visas" for short visits were left out.

Every fifth application from Africa is rejected

First noticeable: The number of decided visa applications at all German embassies and consulates worldwide increased by 58 percent between 2014 and 2017 - the number of rejections by 131. During this period, only a good 10 percent of the decided applications came from Africa. Far more came from Asia (60 percent) and European countries that do not belong to the EU (23 percent). When it comes to rejections, Africa is clearly ahead: 22 percent of all applications were rejected - that's almost one in five. Only one in eight from Europe was rejected, and one in ten from Asia. That means: an application from Africa is rejected twice as often as an application from Asia. 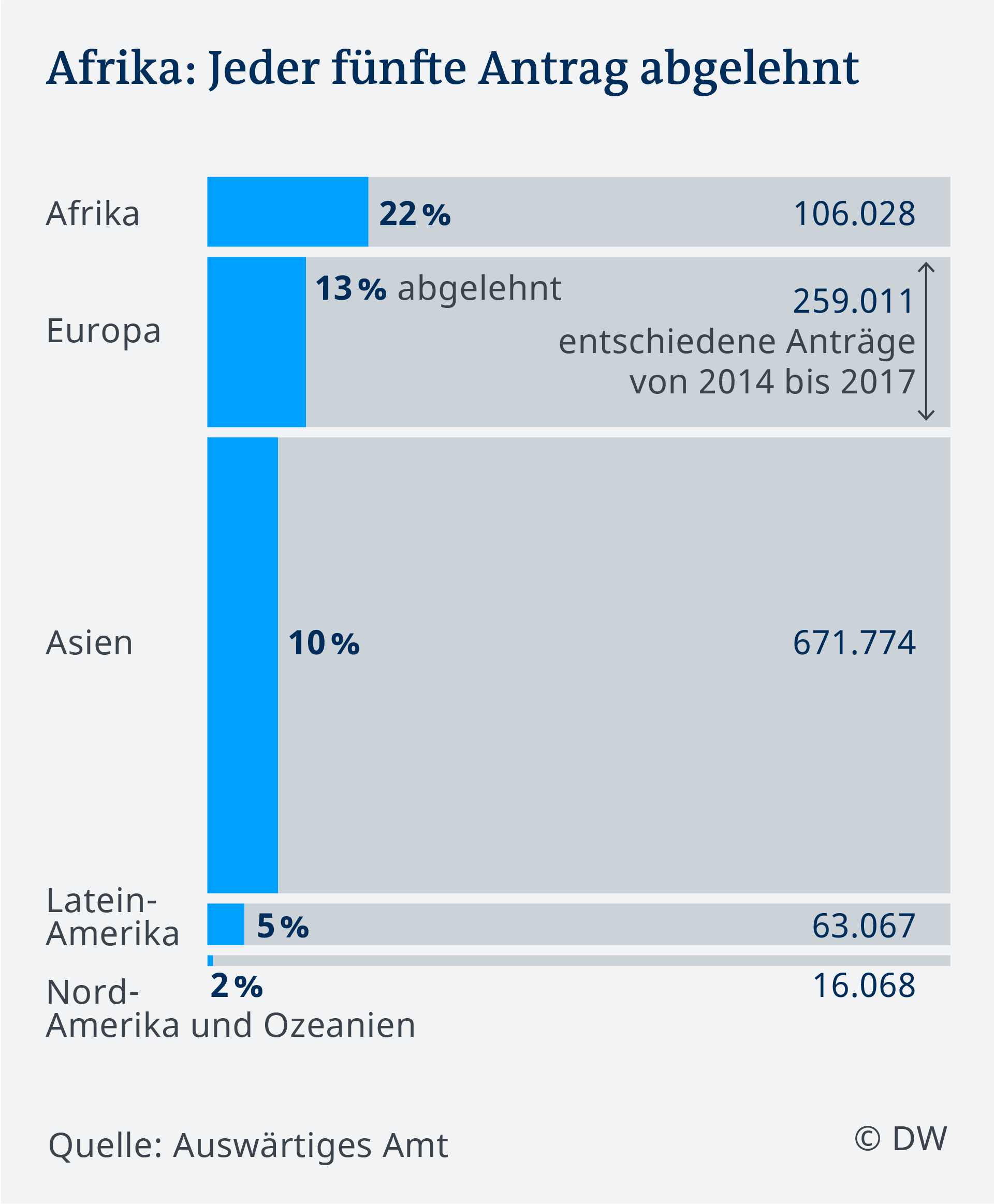 It is difficult to give concrete reasons for this. The Foreign Office did not want to give DW an interview on the results of the data analysis. In response to a DW request, however, it informs that the decision on issuing a visa would be made by the respective embassy on the basis of objective criteria. Applicants must be able to prove their livelihood, i.e. have sufficient funds for the stay in Germany or know a person in Germany who will pay these costs. Furthermore, according to the Foreign Office, the intended purpose of stay must be plausibly proven. In the case of family reunification, spouses or children must therefore clearly demonstrate that they are really married or related to the spouse or parent living in Germany. According to the Foreign Office, there are no instructions to check applications from a certain country more rigorously or to reject them more quickly.

Migration researcher Jochen Oltmer believes that nationality still plays a role. He is a professor at the Institute for Migration Research and Intercultural Studies at the University of Osnabrück. "It's always about the question of the domestic political situation in an applicant's country of origin," he says in an interview with DW. The question is: "Is an entry more likely to be seen as a threat because, for example, there could be security dangers, health risks or dangers to the social system?" The expert believes that this could play a role, especially in the case of applications from Africa. Oltmer: "Is it a rich democracy or a poor dictatorship? If you look at the German ideas of Africa, you see that Africa is seen primarily as a continent that is characterized by poverty, extreme inequality and a high potential for migration. " 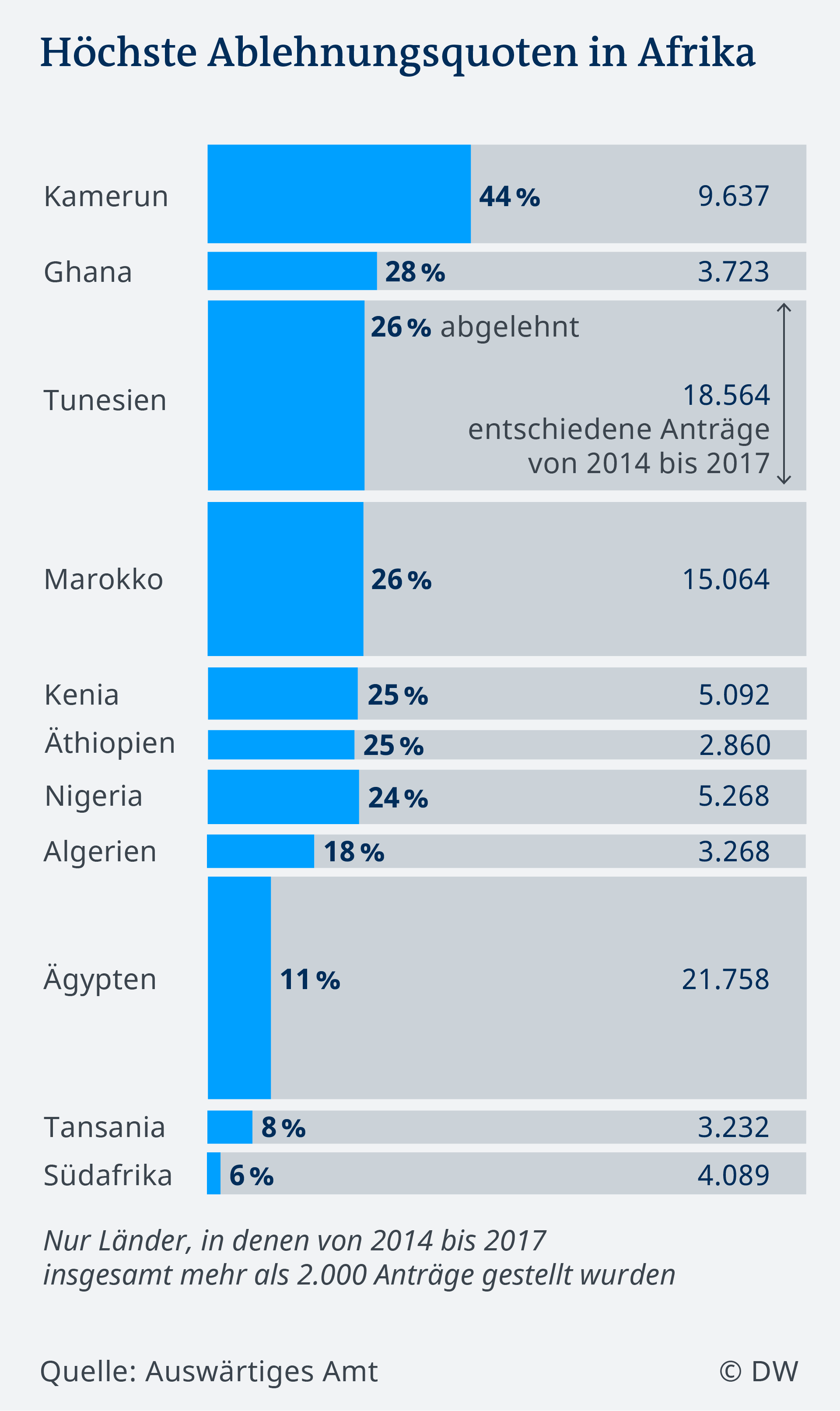 Such reasons could also explain why there are great differences between countries when it comes to rejecting visa applications. In Nigeria, for example, 5268 applications were submitted between 2014 and 2017, in South Africa 4089. Nonetheless, only six percent of applications were rejected in South Africa, whereas in Nigeria 24. Factors: a high potential for migration, serious violent conflicts, the terror of Boko Haram and serious human rights violations, "says Oltmer.

The numbers show a great contradiction between official German politics and reality. German politicians have been promising to improve entry opportunities for young Africans since last year: "We want to enable more young people from Ghana to study or get vocational training in Germany. I think we have to fight illegal migration, but on the other hand we have to fight legal opportunities just open for young people, "said Chancellor Angela Merkel during a visit by Ghanaian President Nana Akufo-Addo in February. 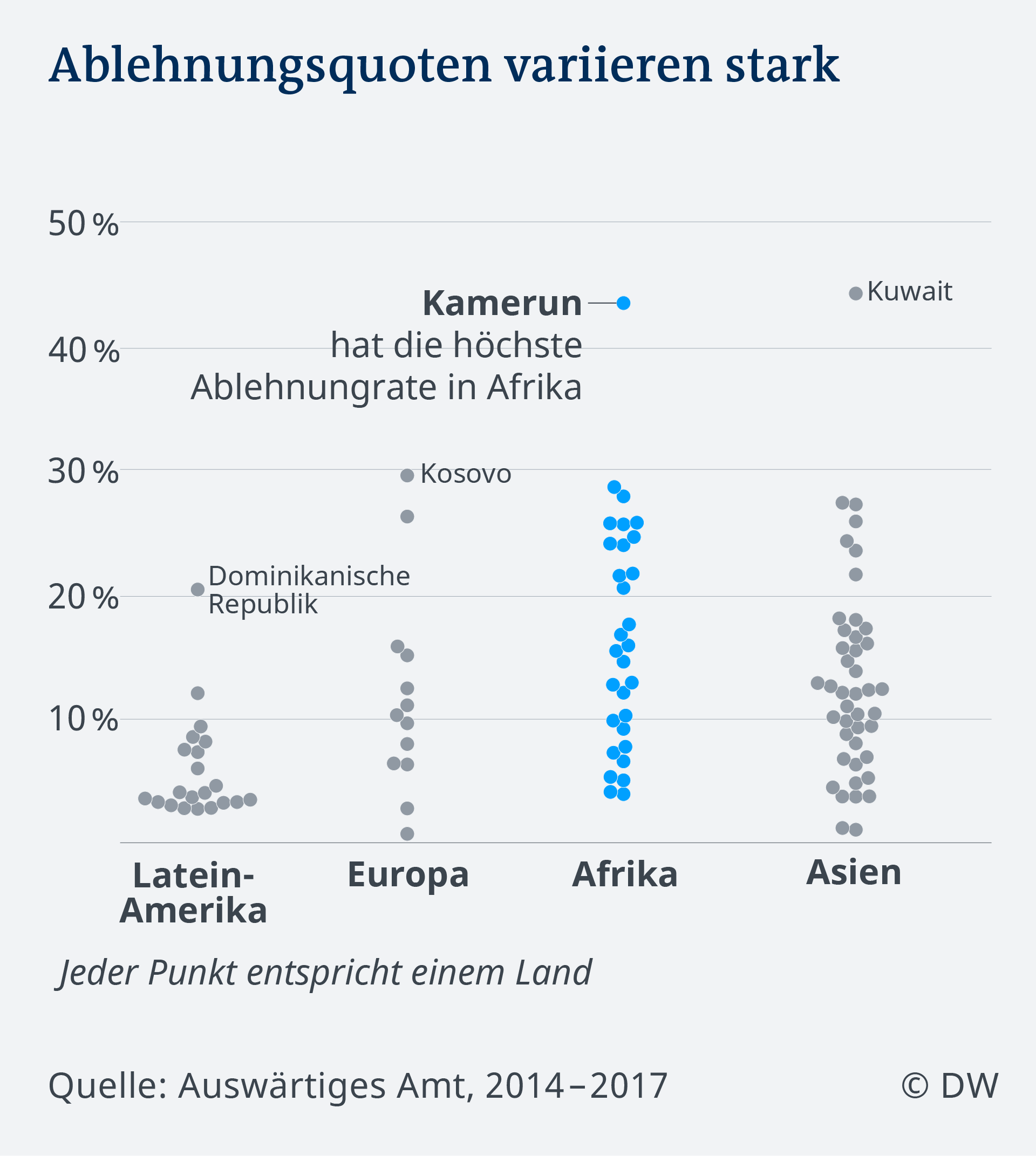 The Ghanaian Grace Boateng has long had her own opinion on German visa policy: "I met someone who said to me: 'You have already rejected seven applications from me. You just don't want me to come to Germany.' Why do you let people submit applications over and over again? They have to pay money, sometimes travel very far to get to the embassy, ​​and then you keep rejecting the applications. That is just absurd. "