How is life in the Air Force

Oldie in the fountain of youth: New life for old tornado

When the first tornadoes went into service with the Air Force in the early 1980s, very few thought that some of these early tornadoes would still be in the air 40 years later. In the meantime, the successor to the "folding kite" in the Bundeswehr has been clarified. It will be around a decade before the heirs of the tornado are actually on the farm. That is how long the old warriors have to stand by. And so that they actually manage that, the Air Force sends some of its 90 tornadoes one after the other to the fountain of youth: In Manching, specialists breathe new life into the aging swing-wing aircraft.

End of the load limit

Almost four years ago, on May 24, 2017, the tornado with the identifier 43 + 42 floated in as the first candidate for the makeover at the Manching airfield. The 43 + 42 had spent most of their career in the USA and had been at home as a training aircraft on the Holloman base. The jet was used correspondingly hard and frequently. In almost four decades of service, 43 + 42 accumulated around 5,400 flight hours. This brought various areas of your cell to the edge of the load limit. These areas had to be extensively renewed in Manching. Six soldiers from the Bundeswehr and 14 technicians from Airbus therefore took on the machine. And rolled up the oldie completely "inside out" in a total of around 2,000 work steps. 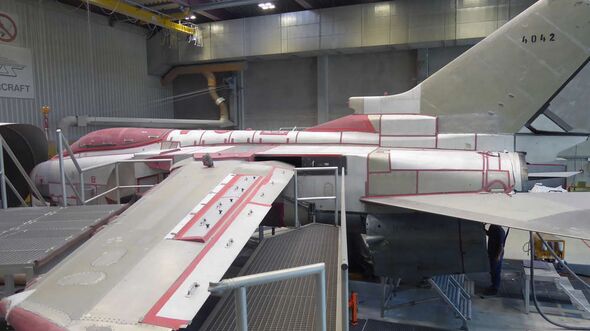 armed forces
Before dismantling, the 43 + 42 was stripped of paint and examined for external damage. Then it got down to business.

A "folding kite" as a major construction site

After arriving in Manching, the 43 + 42 was first stripped of paint and examined for external damage. Then it got down to business: the employees largely dismantled the tornado into its individual parts. It became clear that many central structural components were worn out and had to be replaced with new parts - around 400 in total. The problem with this: All of these parts had to be newly produced. "There is no such thing off the peg," said Sergeant Lars König, who was in charge of the project for the Bundeswehr. For example, the exchange of the ring frame between the front and middle fuselage section was never planned. "For this work, the middle part of the fuselage had to be separated from the front part of the fuselage," reports the Air Force. 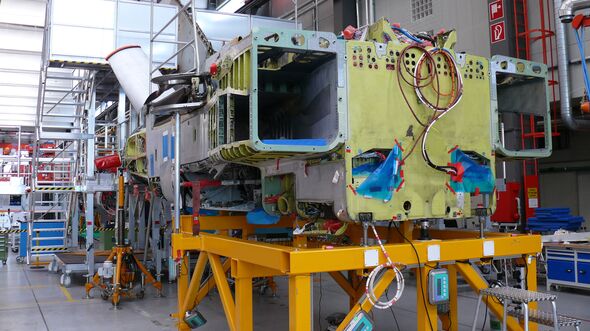 armed forces
The middle part of the fuselage, without paneling, on the specially made support frame. So that the structure does not warp, the work required the highest level of precision.

Precision work to a hundredth of a millimeter

In addition, the "strip" of the Tornado also required the manufacture of new special tools and support devices as well as absolute precision: "Normally, the outer skin connects the frames in a stable manner," explains Lars König. "But we also removed the side paneling for this work. That is why the support device had to be accurate to within a hundredth of a millimeter so that the aircraft would not warp when the frame was removed." 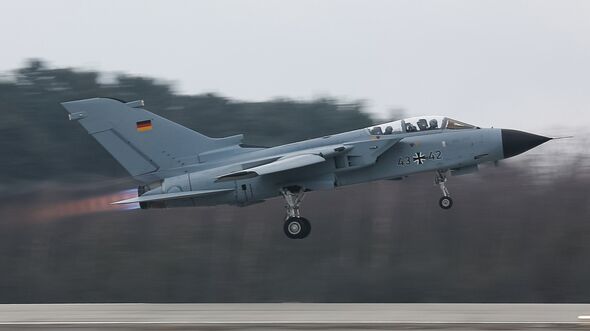 armed forces
Start of a new life: The 43 + 42 took off for the first test flight on February 8th. In mid-March it is to be transferred to TLG 33 in Büchel.

Fit until the end

The tornado specialists finally reaped the fruits of their work on February 8th: On this day, unfortunately the weather wasn’t quite so good with the team, the retreaded Tornado 43 + 42 took off on its second maiden flight after almost three and a half years of construction. Freshly painted and peeled from the egg, the swing-wing wing pushed itself with the afterburner power of its two RB199 turbofans into the cloudy gray winter sky over Manching, where it then landed again. 43 + 42 will probably remain in Manching until mid-March. Then the tornado starts in Büchel with the Tactical Air Force Squadron 33 in its new phase of life. He now has 2,600 flight hours up to the estimated limit of 8,000 hours. That should last well until the end of 2030.