Who invented the barrels and when was that

In addition to influences from the water used, the malt used, the shape of the stills, the type of distillation, etc., the barrel in which a whiskey is stored also has a major influence. Many whiskeys mature in this barrel today for 10 or more years and thus absorb various aromas and flavors from it.

But where do the barrels used come from and what are they made of? 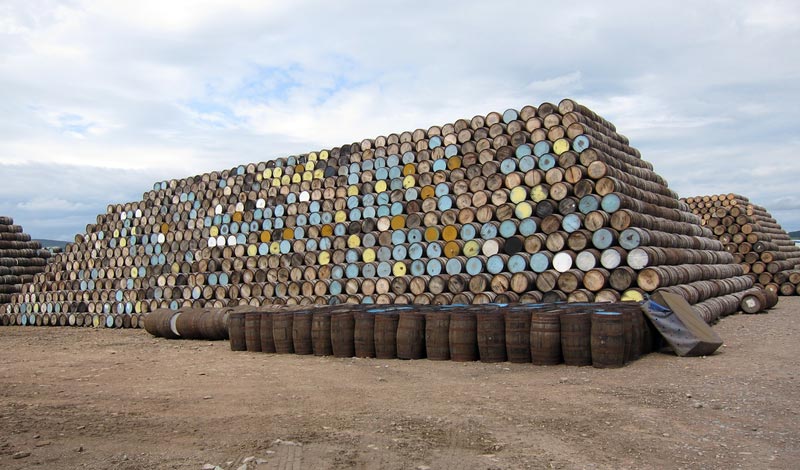 Photo with cc license from Shirokazan

Some of the pictures embedded in the text are about Speyside Cooperage, probably the largest processor of barrels for the whiskey distilleries. Some have their own cooperage, such as Balvenie or Benromach.

In the cooperage, various barrels are handcrafted for further use and, at the end, are also subjected to appropriate quality control.

Compared to the storage time of a whiskey, its actual production is done quickly. After about 2 weeks, all the necessary steps have been completed and the New Spirit can be filled into the barrels. Most of the time is needed for malting the barley (approx. 4-5 days) and mashing (2-4 days).

The whiskey is then filled into the prepared barrels as an almost colorless liquid with just a few flavors. These are then stacked for storage in so-called ware houses, usually on three floors one above the other. 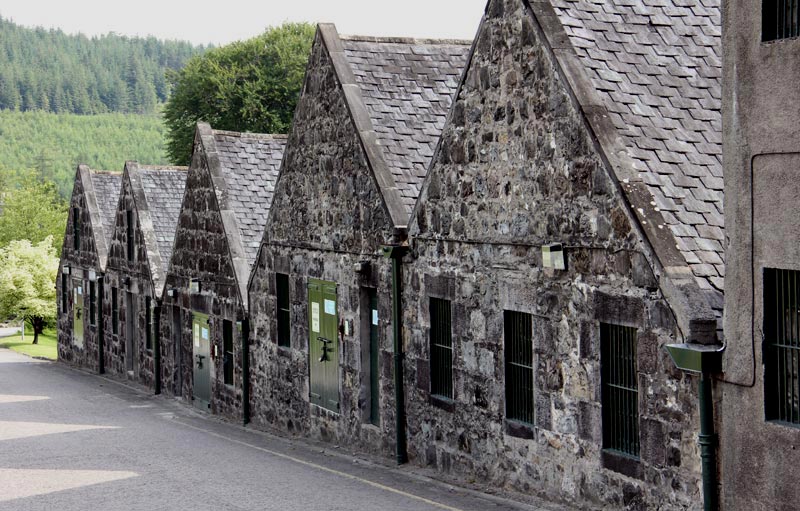 Today we do not know exactly how long barrels have been used to store and mature whiskey. But we know that the ancient Celts invented the wooden barrel.

The barrels were assembled from staves and closed on both sides with a lid or bottom. Rings held them together.

These wooden barrels were then used to store and transport food and liquids, including wine. It was probably more by chance that you noticed that wine that had been stored in a wooden barrel for a long time tasted better. The Romans brought the wooden barrel to Europe for the first time.

The barrels used to mature whiskey today are made of oak. In some countries this is even required by law. Today it is not possible to say for sure whether the hard and resilient wood is the reason for this.

In any case, England used to import large quantities of wine first from France, later also sherry and port from Spain and Portugal and always in wooden barrels. In England you couldn't do anything with the amount of empty wooden barrels, as neither wine was grown nor whiskey produced. Not so in Scotland, where the barrels could be used very well for the storage and transport of whiskey in large quantities. 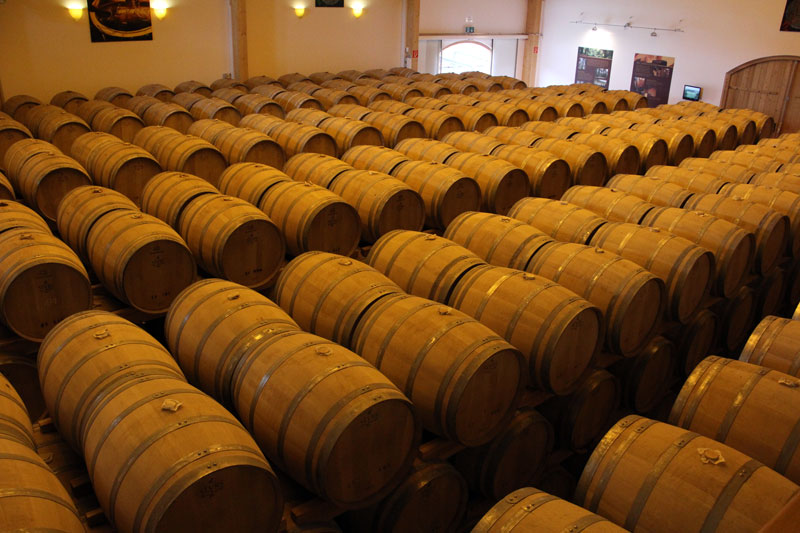 American white oak barrels are used in most whiskey producing countries today. In the USA, it is a legal requirement that American whiskey must mature in new, unused barrels made from this same type of oak. In contrast to Scotland and other countries, where the minimum aging time for whiskey is three years, American bourbon has to mature in barrel for at least two years before it can be called whiskey.

Thus, after bottling, the bourbon barrels were available for distilleries in countries where no regulation required the use of unused barrels. Thus the ex-Bourbon barrels were exported, in large numbers to Scotland. Since 2007, however, certain types of whiskey have also been allowed to be stored in used barrels in the USA. This could lead to a shortage of used barrels and thus to an increase in the prices for barrels.

In addition to the typical oak aroma, the bourbon previously stored in the barrels and the way in which the barrels in the USA are burned out or charred from the inside before use also has. This prevents the release of unwanted aromas, e.g. resin. This process is now widely used worldwide. In addition, the charring of the barrels brings aromas of coconut, caramel and vanilla to the whiskey.

Some distilleries then made various attempts in this regard. This is how Ardbeg created a crocodile skin-like surface when the barrels burned out harder. The name of the whiskey matured in these barrels is Ardbeg Alligator.

The larger sherry barrels, also known as butts or puncheons, are also often used for storage or at least for post-maturation of whiskeys. They give the whiskey a darker color and usually a pleasant sherry aftertaste.

Some Scottish distilleries now have barrels made. Which they then leave to wine producers to store the wines so that they can be returned years later and filled with their whiskey. Port wine barrels are usually only used for finishes, i.e. whiskey matures for a few years in ex-bourbon barrels and is then matured in other barrels for 6 months or longer and thus receives additional aromas.

A Scottish whiskey has to mature in the barrel for at least 3 years (in the USA e.g. only 2 years) before it can even be called whiskey. In order to achieve an ideal aroma and taste, a period of 15-25 years is certainly appropriate. 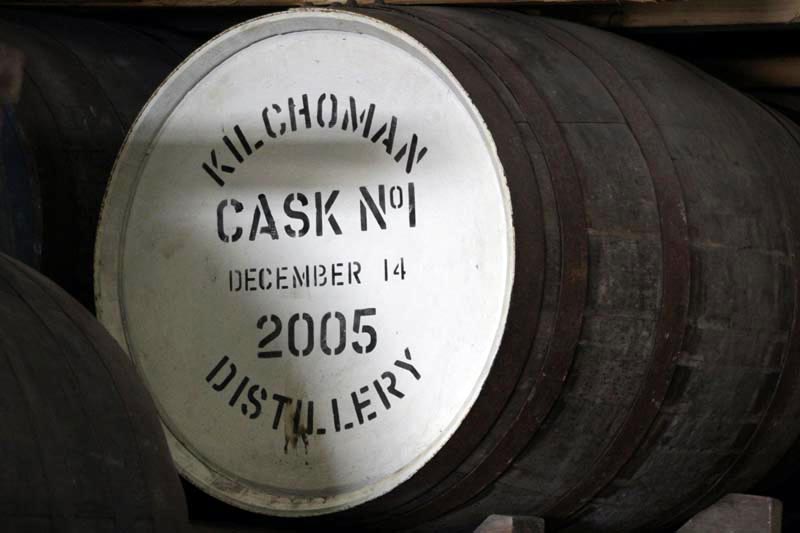 Whiskey barrels are made of oak, which can be either American white oak or European oak. Softwood is unsuitable because of the embedded resin.

The following barrels are usually used for whiskey:

(2) The Hogshead. There are two types of this barrel. The Sherry Hogshead is made from old sherry barrels or by enlarging the American Standard Barrel. The barrel is enlarged by additional staves to a volume of approx. 240 liters.

(2) The bourbon barrel. Bourbon is aged in charred American oak barrels. These have a capacity of 118-120 liters. 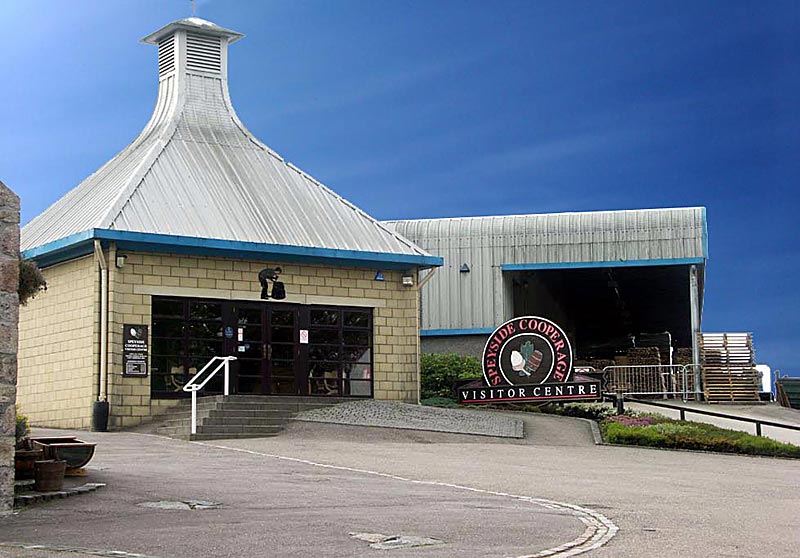 Chemical reactions between alcohol and wood during the ripening of the whiskey increase the amount of esters and aldehydes in the whiskey. The alcohol removes sherry or bourbon aromas from the barrel walls, but also tannins, vanillin and caramel. The contact of the liquid with the barrel wall therefore plays a major role and since this is larger in percentage terms with smaller barrels, these are often more in demand.

Multiple use of barrels means that the aromas that can be extracted from the barrel decrease accordingly. However, these barrels can be reprocessed by burning out the inside. This process releases the vanilla and caramel taste in the wood again.

The costs for the barrels appear to be very high at first (several hundred euros), but in the end they are insignificant in terms of the whiskey price (approx. 5-10 cents per bottle). 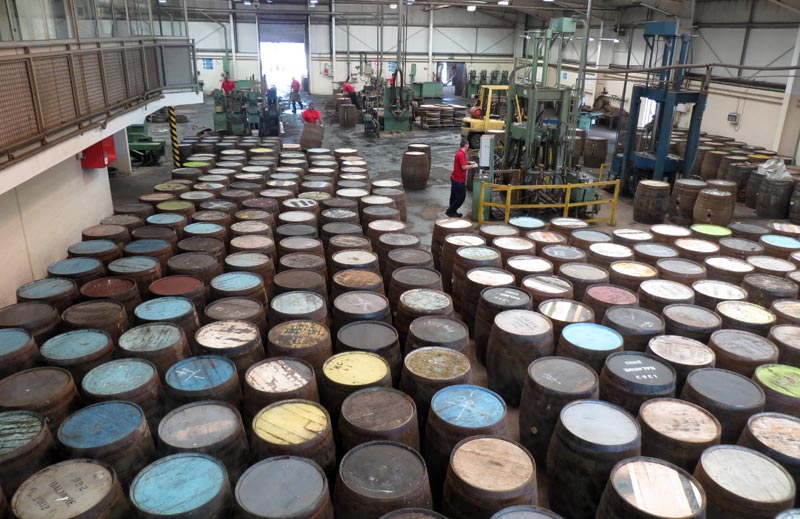 Speyside Cooperage - replenishment for the Cooperage

As a rule, the whiskey loses between 0.5% and 2% alcohol content per year during the maturation period. The Scots refer to this portion as the Angels Share, as it irretrievably evaporates. The reason for this is that the barrels are not 100% airtight and that they “breathe” as a result of expansion and contraction due to temperature fluctuations.

However, more water can evaporate if, for example, it becomes very hot in the warehouse. This increases the alcohol content in the whiskey, which in turn can lead to reactions with the barrel that are not always wanted. As a result, most Scottish distilleries bottle their whiskey at 63.5% alcohol, as this seems to be a reasonable compromise between a short aging period and loss of alcohol through evaporation. 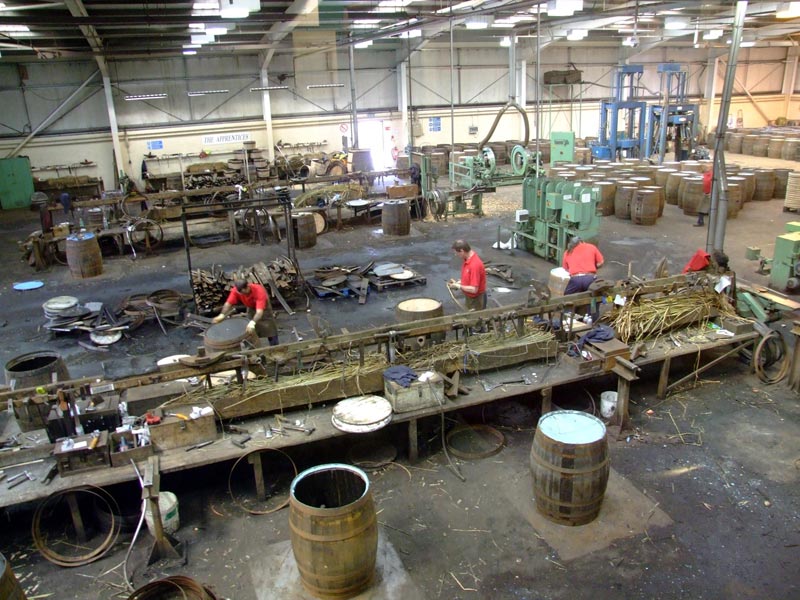 For a few years now, oak barrels, which were previously used to mature other products such as port wine, wine or brandy, have also been used to mature whiskey. This results in unique whiskeys that draw additional flavors from the previously stored product. Important representatives of these types of ripening are:

Whiskey is often stored in ex-Borboun barrels for many years and then matured for 6 months or longer in a second type of barrel (sherry, wine, etc.) and thus receives a so-called special finishing. Balvenie, where

This is used, for example, at Edradour in an experimental variety. 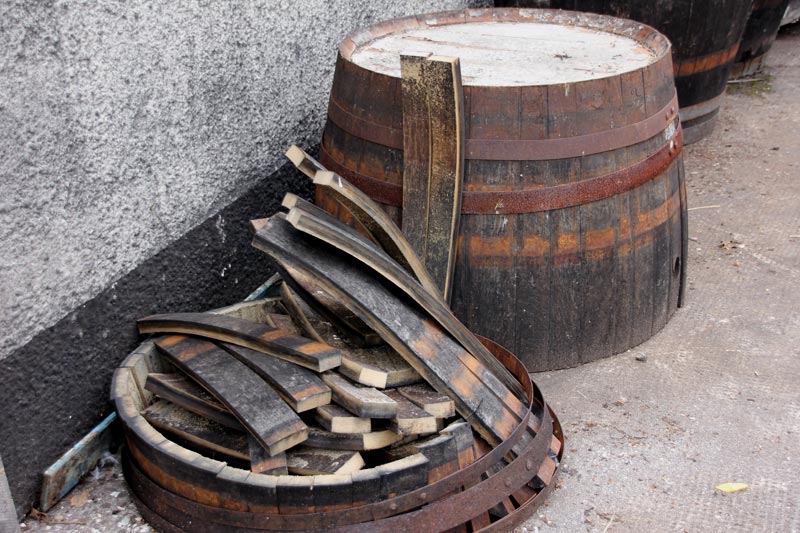