Abhimanyu Vatsala had a son

1. Revati (Sanskrit: रेवती revatī f.) Literally: the "radiant one, the rich one, the one who has prosperity"; (in the pl.) a term for cows and bodies of water; the 27th lunar house (Nakshatra). Revati is the daughter of King Kakudmi and the wife of Balarama, the older brother of Krishna. 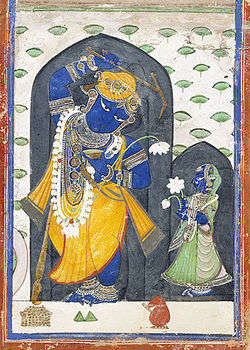 2. Revati, (Sanskrit रेवती revatī f.), Is a spiritual name and means The rich who owns a lot; Name of a moon house, the wife of Balaramas, a Saman. Revati can be given to aspirants with the Soham mantra.

The meeting with Brahma

Revati was the only daughter of King Kakudmi, who was also called Kakudmin and Raivata. He was a powerful ruler who ruled over Kusasthali - a thriving, prosperous, and progressive marine kingdom. Kakudmi also ruled over large areas - including the Anarta Empire.

Believing that no human being was good enough to marry his lovely and gifted daughter, King Kakudmi took Revati into the realm of Brahma (the world where Brahma, the Creator God, lives) for advice to ask how he could find a suitable husband for Revati.

When they got there, Brahma was enjoying a musical performance by the Gandharvas. So King Kakudmi and his daughter Revati patiently waited until the performance was over. Then Kakudmi bowed humbly, made his request and presented a shortlist of those who applied to him for his daughter's hand. Brahma laughed out loud and explained that time is different in the different worlds. In the short time that King Kakudmi and his daughter Revati had waited in the kingdom of Brahma to speak Brahma, 27 Catur Yugas had passed by on earth. (One Catur Yuga corresponds to the cycle of four Yugas or ages of man. Thus, 27 Catur Yugas are a total of 108 Yugas. For comparison: One Brahma day corresponds to 1000 Maha Yugas, with a single Maha Yuga already 4,320,000 years of the people includes.)

Brahma said to Kakudmi: “O King, all those whom you would have accepted as your sons from the depths of your heart have already died in the course of time. 27 Catur Yugas have already passed. Those you have already chosen are gone now, as are their sons, grandsons, and other descendants. You can't even hear their names anymore. Many ages have passed while you listened to our singers. Now the age of the present manus (progenitor of mankind who rules over an era) will soon be over on earth, and the Kali Yuga is already imminent. (A Brahma day is also called a kalpa. There are 14 manus in a kalpa.) Therefore, you must give this virgin jewel to another man. Because you are now alone, and all your relatives, your wives, friends, servants, ministers, armies and treasures have long been swept away by the currents of time. "

When the king heard this, astonishment and horror overwhelmed him. Brahma comforted him and told him that Vishnu, the preserver of the world, is currently incarnated on earth as Krishna and Balarama. And he recommended Kakudmi to give the worthy husband Balarama Revati in marriage. Then King Kakudmi and Revati returned to earth, which they thought they would only have left for a short time. They were shocked by the changes that had taken place during that time. Not only had the landscape and living conditions changed, mankind was now at a deeper level of development within the cycles of spiritual and cultural evolution. The Bhagavata Purana describes how they found the human race to be shrunken in form, of lesser vitality and mentally weakened.

The marriage with Balarama

King Kakudmi and Revati went to Balarama and proposed marriage to him. Since Revati came from a previous yuga, she was far bigger than her future husband. But Balarama, who considered her size to be excessive, hit her on the head with the plow - the weapon characteristic of him - and so Revati shrank to the present size of the people. Now the wedding was duly celebrated. Revati gave birth to her husband two sons, Nisatha and Ulmuka. Both were killed in the Yadu Kingdom's fratricidal war. As a result, Balarama also ended his worldly incarnation while meditating on the sea. At his funeral, Revati mounted his stake and burned with him.

The daughter's marriage to Abhimanyu

Following the tales of the Indian people - especially from Andhra Pradesh - Revati and Balarama also had a daughter named Vatsala, also called Shashirekha. This story is not found in the Mahabharata or the Puranas, however. When Vatsala reached marriageable age, she was promised to her cousin Abhimanyu. Abhimanyu was the son of Pandavas Arjuna and his wife Subhadra, who was therefore Vatsala's aunt. But this agreement was broken when the Pandavas had to flee into exile. And so Vatsala was promised Laxman Kumara, the son of Pandava's arch-rival Duryodhana, who was the eldest of the Kaurava brothers.

Ghatotkacha, the son of Pandavas Bhima, heard about it from his unhappy cousin Abhimanyu and his tanta Subhadra and decided to put this injustice right. He secretly took Vatsala away and instead attended the wedding ceremony with Laxman, for which he magically assumed Vatsala's appearance. Ghatotkacha interrupted the wedding ceremony by taking on horrific forms and thereby frightening Laxman. To their great delight, he made it possible for Abhimanyu and Vatsala to eventually marry. 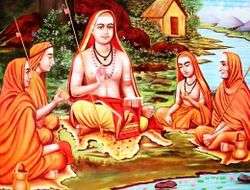 Revati is a spiritual name for meditators with Soham mantra

Revati means the radiant, the rich, the one who has prosperity, the one who is overflowing. Revati is also the name of the 27th lunar house, i.e. a specific lunar constellation. Revati is also the wife of Balarama and also the name of a saman, i.e. a meter, a song melody. If you have the name Revati then that should mean, you shine through the grace of God, you shine and shine, you shine love, you shine joy, you shine friendliness, but you also have a lot of good strength. If you are Revati, then you can influence the lives of many people well, you can help many people, you can serve many. Be a positive force for other people, be someone who does good to others, be self-confident, be courageous and radiant and enjoy the beauty and the good that God gives you.