Why have board games become more popular

Board games are booming in the pandemic

In order to keep up with the booming demand for board games, manufacturers have to invest heavily to expand their production capacities. The world market for board games is estimated at around 15 billion US dollars, that is 12.4 billion euros. This segment is currently growing faster than the overall toy market, not least because more and more adults are getting a taste for games.

"Puzzle games for adults have increased by around 50 percent, one-person games by more than 20 percent," said Hermann Hutter, President of Spieleverlage e.V., the German industry association, to DW.

Board games have already seen solid growth in recent years because many households are striving for "digital withdrawal" and want to spend less time with smartphones and video games. The lockdown measures during the pandemic have exacerbated this development in the traditional game markets of North America, Northern Europe and the Asia-Pacific region. Board games are also becoming increasingly popular in relatively small markets such as southern Europe.

"We grew in all regions last year - fastest in the USA and Great Britain," said Clemens Maier, CEO of Ravensburger AG, to DW. The turnover of the southern German company, which sells board games and puzzles worldwide, grew by 20 percent in the past year, he adds. 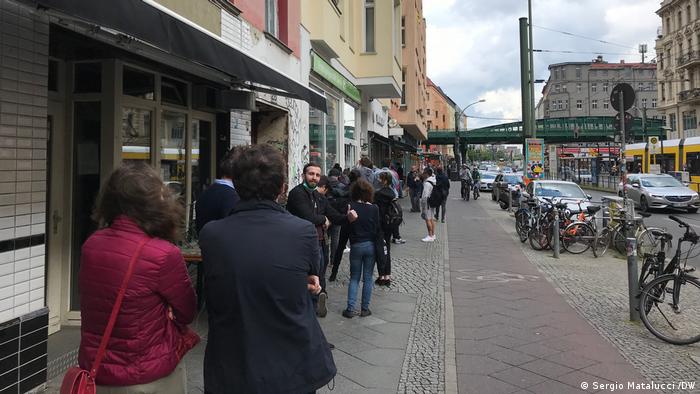 Customers are queuing in front of the "Brettspielgeschäft.Berlin"

Games for children, on the other hand, haven't done particularly well in 2020 unless they are educational. In Italy, for example, toy sales fell by eight percent. Board games for several players also underperformed.

"In the past, complex strategy games in particular were in high demand, even in English," says Josef Anders, owner of the Brettspielgeschäft.Berlin, to DW. "Today it's more family games and games for two people. We are now seeing customers who would otherwise not play."

Puzzles and classic board games are particularly popular right now, suggesting that many older people are returning to childhood adventures to find some distraction during difficult times. "The most popular games were what we would call evergreens - games that people are familiar with and that have a story," said Samuel Susz, director of marketing at Toronto-based Spin Master. The Canadian toy and entertainment company had "an incredibly productive year," with US sales up 25 percent, Susz told DW.

The popularity of board games is not only influenced by the pandemic, but also by digitalization. "Children used to play board games up to the age of twelve; nowadays, many of them switch to the digital world at the age of eight," says Hutter from the games association. "But at around 15 years of age they find their way back to board games. At that age, that's considered sexy and cool, just as it is cool and sexy for older people."

The unexpected boom had multiple effects on the supply chains, especially for toys, 80 percent of which are produced in China. In spring 2020, companies with production facilities abroad had to wait longer than usual for deliveries. At the beginning of 2021, deliveries from China are still a problem, says Hutter from the industry association, because the prices for container transports have quadrupled compared to the same period last year.

In the case of simple board games and puzzles, however, the dependence on imports is not so great because they are mostly produced in Europe. According to Hutter, companies like Ravensburger (Germany) and Piatnik (Austria), which produce their games in the EU, were able to react faster than competitors with long supply chains.

But the booming demand for certain game categories is also causing difficulties for European supply chains. "We have factories mainly in Germany, Poland, the Czech Republic and the Netherlands. But here too we have logistical problems," says Hutter.

The delivery times of the German game manufacturer Ludo Fact are usually between six and eight weeks, now it is 12 to 16 weeks. Ludo Fact produces for 120 companies, but has reached its capacity limits. "You can't just double production within a year," says industry representative Hutter.

In the winter months, many board games were largely out of stock, including the "Corona" dice game, which a family had self-published. The US hit "Cards against Humanity" was also hard to find in Berlin shops before the winter break.

According to Clemens Maier from Ravensburger, the governments' corona restrictions have so far had no significant impact on the availability of machines that are required for the production of games and that mainly come from Italy and Germany. In other words, the supply side can adapt, but it takes more time to expand its capacity.

The pandemic has also changed the way games are sold. "Online sales make up a significant part of the overall market," said US market research firm Arizton Advisory & Intelligence to DW. Retailers point out that demand was particularly high during the lockdown period.

"Our turnover, like the turnover of the entire branch, has grown by double digits," says Josef Anders, owner of Brettspielgeschäft.berlin. "But that was not enough to compensate for the weeks of closings, especially around Christmas time."

In addition, the costs have increased "drastically". "In our case by more than 40 percent," says Anders, because he enlarged the sales area and increased the staff in order to meet the Corona requirements - before the complete closure was imposed in mid-December.


Adaptation from the English by Andreas Becker