Where can I learn Fraktur calligraphy

How nice that you are interested in Gothic script!

There are various sites on the Internet that deal with calligraphy. But most of them are purely history. Some still handle development. Hardly anyone goes into practice. But that's what I'm here for. In this little guide I will show you how you can best write Gothic script yourself. I'll give you a few little tips and tricks that you won't find on other sites.

As always, my introductions are more practical.

The Gothic script is written with a broad nib. This spring is called the tension spring. There are very different versions of it. Some you can use with a pen, others are designed directly as fountain pens. Of course, I find the fountain pens the most practical for exercises.

Spelling of the Gothic script

While the individual letters are broken up into many individual parts in the textured font, the Fraktur font is drawn in one line in many areas. 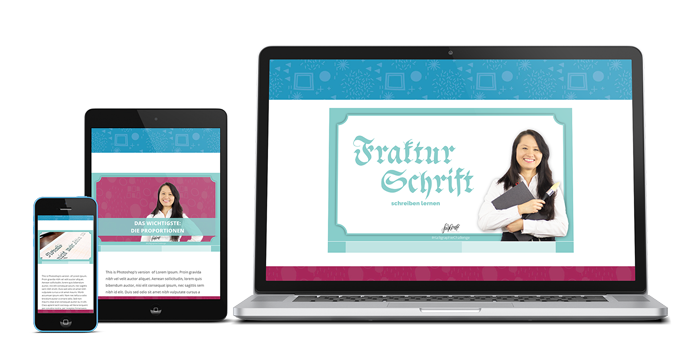 Would you like to finally learn the calligraphy alphabet?

Calligraphy can be so easy! In my video course I will show you my secrets, how I can write beautiful calligraphy with any pen!

To the online course

Fraktur font and texture are very similar at first glance, so that it is often and easily confused here.

Variants of the Gothic script

It doesn't exactly make it easier that there are different variants of the Gothic script. It was practically good form that every master scribe between 1600 and 1800 brought out and published his own versions of his writings.

Connoisseurs can recognize the scribes by their writings.

Size of the Gothic font

In calligraphy, the height of the letters is measured in line widths. There are different approaches here.

Some master scribes have measured their calligraphy fonts in diamonds standing on top of one another and others in line widths one above the other. There are different interpretations here, depending on the scribe.

The basic rule of thumb for the Gothic font is that it is 5-6 line widths high.

This method of determining the size ensures that your fonts always have the same proportions to the width of the lines.

The Gothic script works a lot with thin hairlines. These are pulled with the feather edge. This takes a little practice, but then looks very elegant.

A straight-cut tension spring is used for normal Gothic script. These are nibs with a wide, flat end. The nib is held at a 45 ° angle to the direction of writing.

The use of differently inclined springs and different angles can result in tilted or horizontal fonts.

Since the Fraktur font is an upright font, which is very much based on the Gothic texture, standing up straight is the usual.

For most of the strokes, you run the pen with its full surface on the paper. Carefully lift one side off the sheet of the small decorative pennants. This turns the line into a wedge.

It's a bit difficult at the beginning, but with a little practice and trial and error you will soon get the hang of it. It all depends on pressure, speed and alignment.

Special features in the Gothic script

The Gothic script has some special features in contrast to other calligraphy fonts.

The numbers in Gothic script fit nicely and harmoniously into the typeface. They are written in old style numerals.

They have ascenders and descenders, just like the font. The width of the letter (thick) also blends harmoniously into the typeface of the Fraktur font.

ſ, s and ß are the different variants of the letter s in Gothic script.

Whenever the letter trio SCH is used, the long-S is used "ſch"When it forms the" sch "sound. Also ſp, ſſ and ſt are always written with the long-S if it is not a combination of words.

The distinction between a long-S and a round-S makes it easier to read many words:

“Wachſtube” would therefore be a guardroom, “Guardroom” a wax tube.

The successive two round S is excluded, even if they are at the end of a word. The combination of long-S and round-S is always used here "ſs“Used. The ligature ß later developed from this.

Broken and round feet

Depending on the typist, there are different versions of the letter feet. There are special features with the small m and n, for example. You can write the first smear here with a slight break. You then end the second smear with a bow.

The Gothic script has the rule that the letter combinations ss, ch, ck, ſt and tz become ligatures. This means that they practically form a new, independent letter. This letter is based on the alphabet. The great feature is that the individual letters are written with gaps. The ligature, on the other hand, is written together.

It is a typical phenomenon in handwriting that you become fixated on the letters. As a result, it will 100% happen to you at some point that you forget a few letters.

Do not worry about it! That happens to the best. And it's a little inside joke if that happens again. As a long-time stylist, you will soon be collecting anecdotes about how often you have ruined cards or certificates with missing letters.

The only thing that helps is: starting from scratch.

The Gothic script has a beautiful alphabet. Of course, it differs fundamentally in some letters from our current alphabets.

The capital letters of the alphabet in particular are lively and ornate. They are really difficult to decipher at times.

When reading, it's easy to mistake an A for a U. Without comparison, you can confuse a capital G with a B. The only thing that helps is practice and this overview, which you can easily download here.

The I and the J, for example, make no difference at all, according to John Ludwig Hülshof.

For the first strokes with the Gothic script, you should first familiarize yourself with your material.

If you work with pen and ink, you will always need scratch paper. It doesn't really matter whether you work with a fountain pen or a pen.

You can wipe off any excess ink on the scratch paper. If you are working with a fountain pen, you can always draw a few lines here to see if the ink flow is still good.

If the filler is clogged, you can no longer draw beautiful and rich lines. Then your calligraphy just doesn't look pretty anymore. Unfortunately, this happens very quickly that your filler clogs. So I always have some scratch paper with me, on which I test and, if necessary, even press it on.

More articles on the series »Calligraphy«

More great sites on this topic:

The presentation of the products was implemented with the AAWP plug-in. 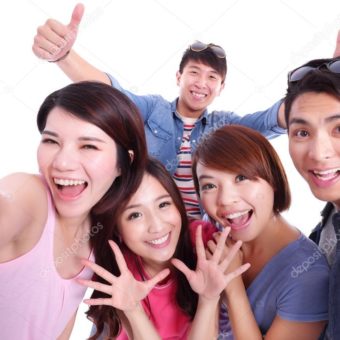 This is all about creativity and calligraphy. In the FarbCafé, art is loved, watercolor is practiced and calligraphy is practiced. Find your favorite course online and find your creative streak! This artist portal was created around Julia and now inspires thousands of visitors every day. Many Thanks! Without you, none of this would be there!