Who is Francis Crick 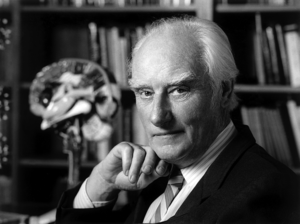 Francis Crick, in the background a model of the brain bequeathed to him by Jacob Bronowski 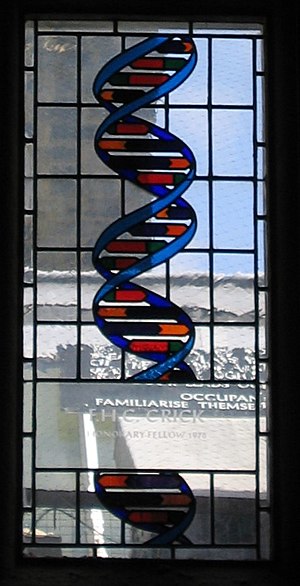 Model of the DNA double helix

Crick had graduated from University College London in 1937 with a degree in physics. In the meantime he worked for the British Navy and worked on magnetic and acoustic sea mines.[1] From 1947 he also studied biology and devoted himself for years, but unsuccessfully, to his doctorate at the Cavendish Laboratory of the University of Cambridge. He was engaged in the X-ray crystallographic study of the hemoglobin molecule when the American biochemist James Watson joined him in 1951 and both set out to decipher the structure of DNA. On February 28, 1953, they had both managed to create a spatial model of the DNA double helix based on X-ray diffraction data from Rosalind Franklin and Maurice Wilkins. This model she in the article Molecular Structure of Nucleic Acids: A Structure for Deoxyribose Nucleic Acid in the magazine Nature presented on April 25, achieved world fame and is still valid today. In 1955, Crick presented his “adapter hypothesis”, which states that a hitherto unknown structure brings the amino acids to their destination and connects them correctly there (today we know that this is the tRNA as an adapter molecule). In 1958 he formulated the central dogma of molecular biology.

In 1962, Crick, Wilkins and Watson received the Nobel Prize in Medicine for their spatial model of DNA. In 1960 Crick received the Albert Lasker Award for Basic Medical Research, in 1961 the Prix Charles-Léopold Mayer, in 1962 a Gairdner Foundation International Award and in 1972 the Royal Medal of the Royal Society.

The research history of Watson, Wilkins, and Crick is now considered a negative paradigm for good scientific practice as it was published in Nature 1953 would never have come about without the unauthorized adoption of unpublished research results by other researchers, especially Rosalind Franklins. The data was illegally obtained through Wilkins, who worked with Franklin at King's College [2][3]

In the 1970s, Crick took up the panspermia hypothesis (directed panspermia).

In old age, Crick tried a great challenge at his own institute in La Jolla, California, trying to unravel the essence of the mind and explain it through a comprehensive theory. In 1990 he postulated that the time was now ripe to tackle the riddle of the human mind scientifically. The people, "their joys and sorrows, their memories, their goals, their sense of their own identity and free will - all of this is really just the behavior of a huge collection of nerve cells and associated molecules", he formulated in his 1994 published book "What the soul really is".