Why was WPF created

WPF and Windows Forms: GUIs in the .NET framework 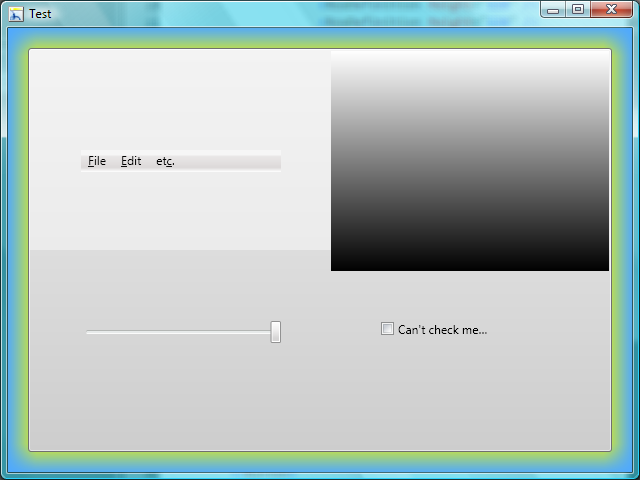 Modern computer programs usually use a graphical user interface. This is often referred to as GUI - an abbreviation for graphical user interface. A window appears that contains various elements that are used for interaction. This can be a simple text output, an input field, a button or many other buttons. These are used to display content to the user or to receive commands and data from him. This is much easier and more intuitive than with a console program, in which all entries are made in writing. Therefore, almost all modern programs are based on GUIs.

The Windows Presentation Foundation (WPF) and Windows Forms (WinForms) frameworks are used to create GUIs. In many cases it is possible to choose between the two techniques. This article introduces the two alternatives with their respective advantages and disadvantages. This is particularly important if you want to learn how to design a graphical user interface yourself. In this case you have to choose one of the two frameworks. This article will help you weigh which technique is better suited to your needs.

When creating a computer program with a graphical user interface, you are usually not designing the windows that are used from scratch. This task would require very advanced programming skills. In addition, the effort would be enormous if you first had to define the appearance and functionality of each window and each element in it from the ground up.

Therefore, so-called frameworks are used for this purpose. These offer you ready-made functions with which you can, for example, create a window or insert a button. Only a few commands are necessary for this. In addition, there are a variety of functions with which you can influence the size, color and other aspects of the appearance. The corresponding framework then implements these commands and ensures that the corresponding elements appear in the desired position on the screen. The use of these tools is essential for creating a modern program. As a programmer, it is therefore very important to familiarize yourself with this technique.

WPF and Windows Forms - components of the .NET framework

Before we can devote ourselves to the comparison of the two frameworks, the question for what purpose we can use them arises. As already shown, they are used to create graphical user interfaces. However, a programming language is also required to generate these. Every language needs a GUI framework that is precisely tailored to it.

For which programming languages ​​are WPF and WinForms suitable?

WPF and Windows Forms in comparison

After we have explained the most important basics and the possible uses of WPF and WinForms, we can now turn to the advantages and disadvantages of these two systems. Based on the points presented here, you can decide which of these techniques you want to learn.

The topicality of the systems

An important point here is that the systems are up to date. WinForms is the older of the two techniques. It was created in the early days of the .NET framework. This may have some advantages - for example, this technology has been tried and tested for a long time, so the probability of errors is low. But WPF is now also very robust, so that there are hardly any differences in this regard.

As a newer framework, however, WPF offers more modern technology. This corresponds to the current status and enables the design of graphical user interfaces with many practical functions and an attractive design. As a result, most programmers now prefer WPF. Only if you want to specialize in the maintenance of older programs, which are often still written with WinForms, is it advantageous to learn this technique.

If you are just starting to design graphical user interfaces, you will certainly want to design attractive windows with many different functions as quickly as possible. Therefore, which of these techniques is easier to learn is an important question.

In this regard, WinForms offers several advantages. This framework is characterized by the fact that you can use it to achieve appealing results very quickly. The first windows can be created quickly this way.

At WPF, however, getting started is a little more difficult. Even for very simple windows and functions, you have to pay attention to numerous details. Therefore, it takes significantly more time to learn how to create your first GUI program.

In the previous section we mentioned that it is very easy to create the first windows with WinForms. However, as soon as you want to insert a window into your program with somewhat more extensive functions that deviate from the standard, the tide turns. Here, WPF is characterized by a significantly higher flexibility. This means that with this framework you can easily adapt the elements to your personal requirements without significantly increasing the complexity of the programs.

To understand this behavior, it makes sense to look at the basis of these two techniques. There are big differences here. WinForms is not a completely independent development. This technology is only an extension of the standard Windows control elements. WinForms makes them available for the .NET framework. You can therefore easily integrate these standard control elements into your program. However, as soon as an element is to deviate from this standard, an enormous programming effort is required, which requires very advanced knowledge.

WPF, on the other hand, was developed from scratch. This framework offers a large number of different elements. You can combine and change these according to your wishes. To illustrate this with an example, let's imagine that we want to insert a button in a window. This should now not only receive a label, but also a small graphic. However, the buttons that are standard controls in Windows do not support graphics. Therefore it is necessary to create this element from scratch. Extensive knowledge is required for this and the effort is also enormous. With WPF, however, we can insert any other elements into the button element - for example, lettering and graphics. Therefore, creating a button that also contains a graphic is not much more complicated than using an ordinary button.

Another important difference between the two systems is the graphical representation. WPF uses vector graphics. This means that the display is based on lines and other geometric elements. WinForms, on the other hand, uses pixel graphics.

There are hardly any differences in many applications. However, if you want to scale an element - so in anotherDisplaying size - vector graphics offer great advantages. These can be easily adapted to new proportions. This is also possible with pixel graphics. However, this often results in an impairment of the display.

Separation of functionality and design

When you create a program with WinForms, you include all of the design specifications directly in the program code. However, WPF uses a different system here. This creates two separate files. For one, you need to create the actual program file. This inserts the individual elements into the window and assigns them various functions. It controls the flow of the program. A so-called XAML file is also required. This contains all the specifications for the design. XAML is a markup language that was specially developed for this purpose. However, this is an extension of XML. It is important to note that XAML is not a programming language. The corresponding document only contains the specifications for the representation of the individual graphic elements of the program. This information is only provided with various tags to make the function clear.

If you are creating your program entirely yourself, there is not much difference between the two techniques. WinForms may even offer a small advantage, since you do not have to familiarize yourself with the structure of the XAML document. This is one of the main reasons that WinForms is a little easier to use for beginners. However, when developing a program in a professional setting, there is often a specialization involved. While a software developer determines the functions of the program, a designer takes care of the layout. The strict separation between function and design that distinguishes WPF makes collaboration much easier. XAML is a simple markup language that is much easier to learn than a programming language. Therefore, the designer can easily familiarize himself with this and design the document in such a way that it implements his drafts. The software developer creates his program code completely independently of this.

Another aspect is the security of the applications. WPF can also convince in this area. This technology offers modern security features that can ward off attacks on your program.

The performance of the applications

Finally, it is important to take a look at the performance of the two techniques. Here too, WPF offers advantages. If you want to develop a program that requires fast processing of the computing processes, WPF is the better choice.

Conclusion: WPF offers many advantages in most cases

If we now draw a conclusion from the comparison, we find that it is almost always worthwhile to learn WPF - although this may seem a bit more complicated at the beginning. This GUI framework offers numerous advantages over Windows Forms. In particular, the higher flexibility, the easier scalability and the separation between functionality and layout are to be mentioned. WPF also offers advantages in terms of security and performance. That is why most modern programs use this technique. In the area of ​​professional software, WinForms can be found almost exclusively in older programs. Although it may be a bit more difficult to get started with WPF, it is also worthwhile for beginners to familiarize themselves with this technique right from the start.