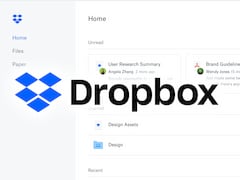 Dropbox restricts free accounts
Graphics / logo: Dropbox Inc, assembly: teltarif.de The Dropbox is one of the most popular online storage services. The basic offer, with a modest 2 GB storage space from today's perspective, is available free of charge. Anyone who canvass additional customers or take part in various campaigns can receive additional free storage. Clients are available for all major platforms such as Windows and macOS, Android and iOS. The data stored in the Dropbox can be synchronized on all devices used with the same account. This means that users always have the same data status everywhere and files are backed up in the cloud.

Dropbox restricts free accounts
Graphics / Logo: Dropbox Inc, Montage: teltarif.de At the beginning of the month, Dropbox severely restricted the use of the cloud storage service for customers with a free account. Previously, any number of end devices such as computers, smartphones and tablets could be connected to the online storage, but the provider has now limited the free accounts to the parallel use of three end devices.

Existing customers who have already connected more than three devices to the storage service can use the service as usual until further notice. However, other PCs, cell phones or tablets can no longer be connected to the Dropbox. If the connection on one of the devices is disconnected, it cannot be re-established if there are already three or more active clients. It is still possible to swap the devices connected to the Dropbox. However, the limitation to three clients remains. If you want to connect more computers, mobile phones, tablets, etc. to your Dropbox account, you have to switch to one of the paid packages.

Dropbox probably wants to win more customers for its subscription options in this way. The company wants and has to make money. Disadvantage for users: The smallest package for private customers offers 1 TB of storage space, but costs 9.99 euros per month or 99 euros per year. In other words: the subscription is not available at a bargain price.

Another alternative is a 2 TB storage plan, which costs 19.99 euros per month or 199 euros per year. However, there are no "smaller" tariffs - for example with 50 or 100 GB of storage space, which are then correspondingly cheaper, but also enable connection to an unlimited number of devices.

With Microsoft OneDrive, Box.com or Google Drive - to name just a few examples - there are numerous alternatives to Dropbox. However, Dropbox has established itself as a kind of "norm" that is used not only by many end users, but also by numerous apps to store data.

By the way, there are also online storage services with servers in Germany, which we have put together in a guide.