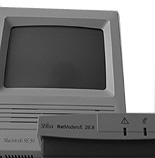 Cisco router as a MacIP gateway

For this you need a Mac with LocalTalk interface (printer interface), LocalTalk cable, a LocalTalk Ethernet bridge and a MacIP gateway. The data transport is then in three stages:

The process appears so complex because Cisco did not have any LocalTalk interfaces in its portfolio. Therefore, the process of tunneling IP packets in DDP (AppleTalk) (MacIP gateway) and the LocalTalk Ethernet bridge must be separated. Other devices such as the Cayman GatorBox combine the LocalTalk Ethernet Bridge and MacIP conversion in one device, but are very difficult to obtain.

Macs with the appropriate gateway software from Apple are well suited as MacIP gateways - but they need a lot of power and the software is difficult to get. That is why I recommend older Cisco routers, which are available in extremely economical versions (less than 5 watts) for little money, without having to search for a long time. For this you need ...

Here is a configuration excerpt for a Cisco router with IOS 12.3:

Cisco aside loosely related to MacIP

How to give a Cisco a new IOS or how to log on to a Cisco via Telnet or SSH should not be an issue here, it goes too far and there are enough resources in the network.

With the download navigator, which is still freely accessible, you can find out the exact requirements for RAM and Flash for the given version.

See also the discontinuation of AppleTalk support from Cisco. After that, routers that use AppleTalk should no longer be operated in security-critical areas (e.g. directly on the Internet), as no security updates will appear for them.

With the kind support of PoC.