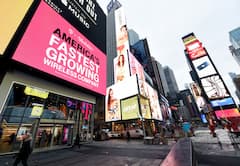 T-Mobile US Flagship Store in Times Square, New York, USA
Photo: T-Mobile USA It was speculated for a long time, then the talks were officially ended after a friendly dinner, only to be secretly resumed a little later. Yesterday there was finally clear text: The mobile phone companies T-Mobile USA and Sprint will merge and operate as the new "T-Mobile", like T-Mobil. Tell Boss John Legere and Sprint boss Marcelo Claure in an informational video about the merger.

T-Mobile US Flagship Store in Times Square, New York, USA
Photo: T-Mobile USA The headquarters of the new company will remain in Bellevue, in the state of Washington (US west coast), and will continue to be run by the previous T-Mobile boss, John Legere. T-Mobile Managing Director (COO) Mike Sievert remains on the board. Further members of the new management will be selected from both companies in the near future until the so-called "Closing" has taken place, reports the MobileworldLive portal of the GSMA mobile communications association.

SoftBank stays on board

Sprint was previously owned by the Japanese SoftBank, which is run by Internet entrepreneur and visionary Masayoshi Son. Son and the previous head of Sprint, the Bolivian Marcelo Claure, will also be represented on the new overall board. Marcelo Claure co-founded the global wireless wholesaler and distributor ("broadliner") Brightstar before joining Sprint in 2014.

According to figures from the global mobile communications association GSMA, T-Mobile US and Sprint are the third and fourth largest cellular network operators in the United States with a market share of 19 and 12 percent, respectively. The undisputed market leader in the USA remains Verizon (36 percent), followed by the telephone veteran AT&T (with 30 percent). The new "T-Mobile US" would then be in second place among all mobile communications companies in the USA.

More network expansion in the province

Marcelo Claure and John Legere announced that the new company wanted to massively expand the network in rural areas of the USA, where people sometimes have no or no reasonable internet or telephone access. The establishment and operation of new mobile phone shops and network expansion, the creation or expansion of call centers for customer care would create a lot of new jobs. A total of around 33 billion euros (40 billion US dollars) are to be reinvested.

The USA is the world leader in the expansion of 4G (LTE) networks, and the future development of 5G is only possible together. The common network should be better and more efficient and offer more innovation. The prices would still go down.

T-Mobile USA technology boss Neville Ray emphasized that the combination of the mobile radio frequencies at 2.5 GHz, which Sprint has and at 600 MHz, which T-Mobile bought some time ago, the highest network capacity in US history would offer. In flowery terms, the future T-Mobile USA network is dubbed the "mother of all networks". It is said to have 85,000 macro base stations and 50,000 additional small cells. Nevertheless, the merged T-Mobile will offer to the American supervisory authority Federal Communications Commission (FCC) for further spectrum in the millimeter range.

At the moment, Sprint and T-Mobile are still using completely different technologies. Specifically: Sprint customers currently make calls with CDMA technology in the 800 MHz range, which is (almost) only available in the USA. Existing Sprint customers will be migrated from CDMA to Voice-over-LTE-capable 4G telephones (LTE / VoLTE) over the next three years. Around 20 million Sprint customers are said to already have T-Mobile compatible devices. However, all Sprint customers need a new T-Mobile SIM card and can then continue making calls with a suitable cell phone. The CDMA process previously used by Sprint does not have any SIM cards at all; activation takes place here via the serial number of the mobile phone. The conversion from CDMA to LTE will be strongly pushed, the existing CDMA-800 network will only run until all customers have been converted.

Blessing from the US antitrust authorities necessary

The story is not yet in the dry cloths, because first the American authorities, both the FCC and the Justice Department have to give their approval. This is not necessarily considered safe. The ministry had unexpectedly prevented the merger of AT&T and Time Warner once before. However, if everything goes well, observers suspect that the process could be completed in early to mid-2019.

Even the optimism that many new jobs could be created is not shared by all observers. Above all, the merger would bring cost savings (one speaks of almost 5 billion euros), and that could also mean the loss of jobs. Nor is it certain that prices will really go down any further.

For Tim Höttges, the merger is “a historic moment for Deutsche Telekom”, he said in an interview with Handelsblatt. Höttges is optimistic that it will get approval from the antitrust authorities. The deal is good for customers and competition in the USA. “That's why we believe in this deal. And the fact that it is approved. ". He wants to keep fighting for it.

Höttges is satisfied with the “good connection we now have with SoftBank”. A good partnership and even friendship had emerged, according to the Telekom boss. There are no further concrete plans yet: “We are not competitors. We are the market leader in Europe and SoftBank in Japan. That makes a lot possible, but nothing concrete is planned yet. We think similarly about innovation models, SoftBank is even further ahead than we are. "

What does the deal bring for German customers?