Who was Swami Vivekanand 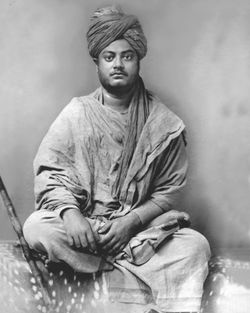 He was the first Indian yoga master to teach on a large scale in the West, in America and Europe. But what is the meaning of the Sanskrit word Vivekananda? Viveka means distinctive character. Ananda means joy and bliss. So Vivekananda is the one who enjoys correct discernment.

As a wandering monk he traveled all over India and taught the Upanishad-based Vedanta without any Hindu mythology as a rational philosophical system. As one of the very first Indian yogis, Swami Vivekananda traveled to America in 1893 and gave a speech in the "Congress of World Religions". From 1893 to 1896 a lecture tour through the USA and a short visit to England followed. His main intention was to spread the Advaita Vedanta in the west and to create a west-east understanding. The first Vedanta Association was founded in New York in 1894, and many more followed. After his return to India, Swami Vivekananda founded the Ramakrishna Mission in 1897. In 1898 he came again for a short visit to the USA. In 1902, Swami Vivekananda left his physical body in India.

Swami Vivekananda carried the vision of a universal person who united the ways of Karma Yoga, Bhakti Yoga, Jnana Yoga and Raja Yoga and thus achieved complete freedom of the self. He taught breathing exercises and asanas for better concentration and meditation and wrote several books.

Transcription of a lecture video (2014) by Sukadev about Vivekananda

Vivekananda means "the joy of discernment". Vivekananda is also the name of one of the great yoga masters, one of the innovators of yoga and Vedanta. Swami Vivekananda was Swami, he was a monk, lived from 1863 to 1902, so he only had a very short life. Swami Vivekananda was born under the name Narendra, which was his maiden name. Narendra, then often called Naren, was a son in a family that had certainly grown up with Western ideals. And he was also familiar with reform movements of Hinduism, especially the Brahmo Samaj, founded by Swami Dayananda.

He was a student at Calcutta University when he began to think deeply about God. And he went to many masters to find out whether they knew God and could show him God. And so he came to Ramakrishna Paramahamsa, the great spiritual master, the great mystic, one of the perhaps most important masters of the 19th century. And when Swami Vivekananda met Ramakrishna, Ramakrishna led him into the depths of the Self. There is such an anecdote, when Swami Vivekananda, Narendra, came to Ramakrishna, Ramakrishna stood up as soon as he saw Vivekananda from afar and said, "At last, why did you make me wait so long?"

In the sense of, he was expecting his student, his previous life student. On the one hand Vivekananda was a little upset that such a man greeted him like that, on the other hand he was fascinated, he listened to Ramakrishna's statements and in the end he said to him: "Master, you talk about God all the time, you have God Experienced?" Ramakrishna smiled and said, "Yes, I experience God all the time. The way I see you, only more clearly." And Vivekananda replied: "Can I also experience God?" Ramakrishna smiled and said, "Do you want?" And Vivekananda swallowed a moment and said, "Yes."

And Vivekandana was the one who wrote the big books, gave the big lectures, went on lecture tours, inspired people and ultimately put the whole yoga system into modern words and thus brought tradition into modernity. To this day, the works of Swami Vivekananda Karma Yoga, Bhakti Yoga, Jnana Yoga and Raja Yoga are formative and express to this day what these yoga paths are about.

Swami Vivekananda went to the first parliament of the world religions in Chicago - I think it was 1896 - and he spoke there and delighted the audience. And so he was invited on lecture tours, and he traveled for some time through North America, particularly through the USA. He also traveled to Great Britain, he also traveled to Europe, France, Germany, met the Indologist Paul Deussen there, went back to India and also traveled to the West again. So he founded the first Vedanta Centers, both in England and in America. And to this day there are some centers, one could also say ashramas in North America, which were founded by Swami Vivekananda himself, where he himself stayed and which are charged with great spiritual power.

There is so much more to tell about Swami Vivekananda and we have a very extensive biography on our website. Just go to www.yoga-vidya.de, enter there, "Vivekananda" or "Swami Vivekananda" and there you will find an extensive article, also with many pictures, so photos and quotes from this great master. Everyone who practices yoga is inwardly indebted to Swami Vivekananda, because Swami Vivekananda passed yoga on in such a way that it became interesting for Westerners, classical spiritual yoga, but summarized in modern terms and in a way that is authoritative to this day .