Are tautomeric functional isomers of each other

Isomerism and its different types

Within the teaching of (organic) chemistry, the term “isomerism” appears constantly. Knowing about isomerism and its diversity is therefore fundamental.

The chemist uses the term “isomerism” to mean that there are molecules (so-called isomers) that have a different structure (formula) despite having the same molecular formula (i.e. the same number and type of atoms).

They are different substances with different (bio) chemical and physical properties (e.g .: (non) toxic, melting and boiling points or solubility).

The reason for this is that the molecules / isomers are structured differently. The respective structural formulas (i.e. the arrangement of the atoms or the atom groups) differ from one another. There are two broad categories of isomerism, namely constitutional and stereoisomerism.

Note: Almost all types of isomerism are given two names.

These isomers have exactly the same empirical formula. The way in which the individual atoms / groups of atoms are linked together are different.

a) the functional isomerism:

The isomers have different functional groups, which are decisive for the assignment of the respective substance classes.

b) the skeletal / framework isomerism:

The “basic structures” of the isomers are rearranged by branches. An “atomic chain” can have several branches.

The functional groups are each in a different “position”.

One isomer is converted into another by the parts of the molecule (mostly protons) changing places. This happens in equilibrium reactions. 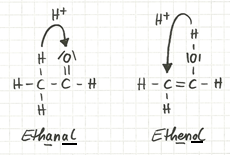 The isomers are differentiated by the number and position of the single, double and triple bonds.

All molecules have the same molecular formula and the same constitution (linking of atoms or groups of atoms). However, they form isomers because they differ from one another in their spatial arrangement.

a) the conformational / rotational isomerism:

When there are only single bonds, the parts of the molecule have the ability to rotate freely. They can take up different positions without breaking the atomic bond (s).
Attention: As an exception, this is exactly the same material.
Note: Molecules with multiple bond (s) are not freely rotatable! 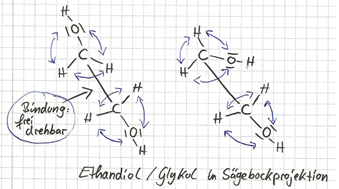 The isomers have different positions of certain atoms / groups of atoms. If they are together on one side, this is expressed with "Z" or "cis". If not, the term is “E” or “trans”. There are two different substances.

Some molecules (especially those that are crucial for biochemistry) have one or more centers of chirality. Chirality is an artificial word, comes from the Greek and means something like "handedness". The isomers relate to one another like a right and a left hand, like a kind of mirror image. However, they are considered to be two different substances. 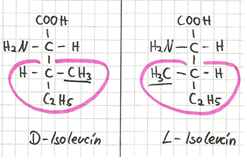