Is the universe a dodecahedron 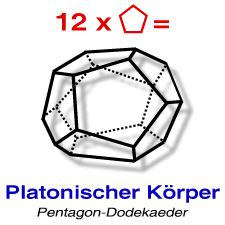 A relatively new but hypothetical cosmological model for a closedUniverse that is from Luminet et al. 2003 was presented in the journal Nature (astro-ph / 0310253). It is an alternative model to conventional cosmology (flat Euclidean cosmos), which, however, is compatible with observation data from the microwave satellite WMAP.

Properties of the 'soccer universe'

The dodecahedron universe is not flat, but has a positive curvature (k = +1). The total density parameter is therefore also just above 1, but with an assumed value of 1.013 in dodecahedron space, it deviates only slightly from the flat universe. So far, background radiation observations cannot rule out this scenario.
The dodecahedron universe consists of 120 pentagon dodecahedra, the one Hypersphere form. The hypersphere is the 3D surface of a 4D sphere. The pentagon dodecahedron is a three-dimensional, football-like structure made up of 12 pentagons (pentagons), as illustrated on the right. A twelve-sided is generally called a dodecahedron. The whole thing has a historical reference, because the dodecahedron is one of the five Platonic solids, convex, geometric bodies that are made up of regular polygons (polygons).
The propagation of density waves in the dodecahedral universe has so far been compatible with the measurement data from the background radiation. The characteristic structure of overtones in the radiation distribution of three Kelvin radiation can therefore be explained by an open or closed Euclidean universe (curvature zero) or a closed dodecahedron universe (positive curvature).

An even newer alternative of a universe with negative curvature (hyperbolic universe) is the Horn universe (Aurich et al. 2004).

Luminet's research group has meanwhile reported which distributions can be expected on the polarization maps of the background radiation if the universe has a non-trivial topology (astro-ph / 0601433). So far, these are only hypotheses that are on a theoretical basis but have not yet been observed. The cosmologists hope that the new PLANCK satellite, which is scheduled to start in 2008 and the background radiation will be measured in even greater detail, will soon clarify the universe in which we actually live.
A detailed description of the topological aspects of the universe can be found under the entry Topology.