Can my school take my steam

Our school system in times of the pandemic: under steam

In this country, parents are not interested in the community, but only in their child. In the current situation, this is a major meltdown. 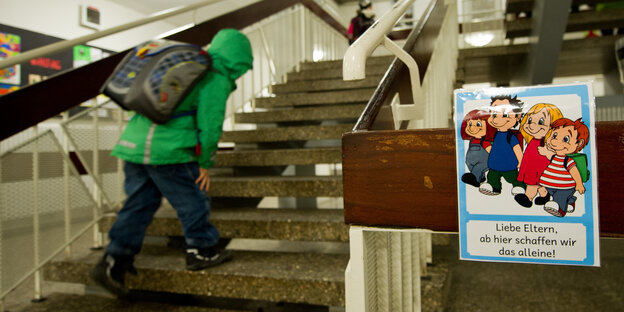 Helicopter parents have been around for a long time in Germany: Scene from a Stuttgart elementary school in 2014 Photo: dpa

When I attended my first parents' evening in a West German kindergarten, I was a bit astonished: It was less or not about the interests of the group, but mainly about those of the individual child. My daughter. My son. My child. Has, needs, doesn't want.

This situation worsened at school and I went through parents' evenings with a constant racing heart. I was unable to speak up, since otherwise I was threatened with abusive behavior in most cases.

I come from a society in which the community was placed above the individual. This project has failed and that is not the topic here. But how, I still ask myself, should a society work in which people only care that “their child” is doing well? In which one's own child is seen as an extension of one's own ego, and in which everything, really everything, has to be done to ensure that this ego's individual needs are satisfied?

I grew up in a system where school was a formidable institution, a preparation for citizenship. Teachers were people of respect who were rarely contradicted. Parents evenings were there to inform the parents about organizational, school issues or problems that the child caused because the child misbehaved.

Parents graciously or ungraciously allow the state to teach their child

Now we have a roughly opposite system. Parents graciously or ungraciously allow the state to teach their own child. The competence of teachers is constantly being questioned by parents and students. Parents' evenings are there so that parents can complain about the bad treatment of their child. If the child has written a bad paper, the work must have been too hard, the child too poorly prepared for it. The child himself is not given responsibility for his or her actions. The child can't do anything wrong, because the child does my child is.

Now we have a meltdown in this nice school system, we have a pandemic that requires that we be considerate. In the school system of the GDR, which I otherwise reject on many points, that would have gone almost without any problems. We were used to queuing up behind the scenes. Our current school system here is a steam boiler in such an extreme situation.

How should each "my child“Be addressed in view of the various brand new difficulties that the school management, the teachers and parents and children will face? The school administrators see themselves as lightning rods. Although they do not even decide on the mask requirement, they would have to defend it. They face hatred and anger.

At the Ida-Ehre-Schule in Hamburg there was a corona mass test last week due to an increasingly uncontrollable outbreak. It happens and will happen again. But these problems cannot be solved by mobbing and accusations, but only by everyone keeping their private, perhaps not all that important problems to themselves so that the headmasters and teachers can deal with the really important things. How to protect teachers and students and how to conduct meaningful lessons in which students learn something.

That is what it should be about and not about Teacher X doing a class test too late for "my child"Announced, uh, uh, not about the fact that"my child“Doesn't feel so good with the mask - I don't feel good with the mask either, nobody feels good with it. But it's not a disaster. It is a small contribution, and we should educate our children to compromise on their personal well-being, in the service of the community, which is also theirs, and whose support every person needs.