Judy Garland was a light alto

Renée Zellweger plays Judy Garland: As if she had just died

The biopic "Judy" gives the singer and actress Judy Garland something very valuable back: the dignity of her own, very special fate. 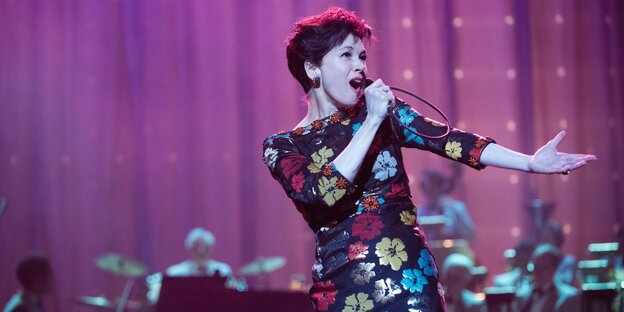 Judy (Renée Zellweger) weakened and yet strong during her appearance in the “Talk-of-the-Town” club Photo: Entertainment One

For all non-fans, their life is just a cliché. Judy Garland - one of the child stars who failed at early fame. Their adult life was marked by drug addiction and scandals, the last including their own death, at the age of 47, much too early. Even today, 50 years later, it is impossible to say whether it was suicide or accident or a complicated mixture of both. A typical Hollywood woman's life, the final humiliation of which is that her example is now regarded as one of many when she was unique in her time.

Rupert Goold's biopic "Judy" starts with a two-time Judy in need. First you see her as a 16-year-old on the set of "The Wizard of Oz", where an ice-cold business takes no account of the psychological or physical well-being of young people. Then the actual film begins with the 46-year-old singer, who returns home from a long tour with her two children in tow and has to discover that her apartment has been terminated because of outstanding rent payments.

You can tell from the routine with which she copes with the situation through a mixture of persistent denial and mechanical execution of an emergency program that none of this has happened for the first time. When the ex-husband also threatens to withdraw custody, Judy has to accept the unpopular offer of an England tour in order to get back on her feet financially.

The events surrounding Garland's five-week guest performance in the London “Talk of the Town” club in the spring of 1969 form the heart of the film. It tells of the humiliations and defeats as well as the last triumphs of a woman marked by alcohol and pill addiction, whose charismatic charisma and great vocal talent still shine through all acts of self-destruction.

Somewhat parabolic-mechanical, the film sums up everything in its secondary characters that makes life so difficult for her: the unscrupulous exploitation by changing impresarios and changing lovers, the often cowardly reluctance of assistants and doctors who do not want to mess with the star , and the difficult to endure rollercoaster between being deified and demonized.

In flashbacks, the film returns to her time as a child star and shows the brutality of the company in a contemporary way, which had girls' bodies with stimulants, diet measures and degradations. Even the heartfelt, understanding admiration by the gay audience of the 1960s, which the film illustrates episodically, cannot alleviate the consequences of this trauma.

As a more or less classic biopic, “Judy” delivers little that is new. But the film is worthwhile because it gives Judy Garland back the dignity of her own, very special fate. The fact that he succeeds is primarily due to Renée Zellweger's appearance, which has a truly transforming quality: Zellweger melts the hearts of the audience.

Whereby she doesn't just imitate Garland - hairstyle and make-up ensure a maximum approximation, but underneath Zellweger always remains recognizable as herself. She also sings herself - and hits the tone of the no longer perfect so precisely that the re-enacted club performances become vibrantly emotional climaxes.

Zellweger not only plays Garland as a helpless addict, but also brings out the remnants of the strengths that are part of a career like hers: a defiant belief in romance and at the same time great hardship towards yourself. In the end, you mourn this unique woman, as if she had just died.