How can the redshift be described

The cosmological redshift z can be derived very easily from observations of spectra. If you are interested in how old the object in question is with a given redshift, you need a cosmological model. From the observation of the cosmic background radiation, a set of cosmological parameters is derived that describes our universe very well. These parameters include the proportion of dark energy, the proportion of dark and baryonic matter, the Hubble parameters and the curvature parameters. If you know it, you can assign an age to a redshift cosmic time (engl. cosmic time) is called. Cosmic time corresponds to the age of the universe since the Big Bang. It can be extracted from the Friedmann equations and shows a dependence on the cosmological parameters. 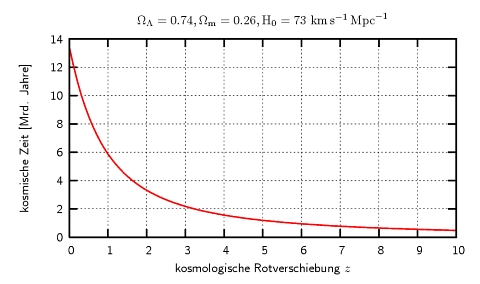 The diagram above shows the relationship between redshift and age of the universe as a graph. At z = 0 is the local universe, i.e. our immediate surroundings. A redshift z = 1100 (not shown here) marks the limit of the electromagnetically observable universe. Because at this redshift the occurred Recombination. For redshifts greater than about a thousand, the universe is not transparent (optically thick), because radiation cannot penetrate the primordial plasma of electrons and protons. During the recombination, the plasma was cool enough that one electron could be captured by one proton. Neutral hydrogen (HI) was formed, and the universe became transparent to radiation (optically thin). As you can see in the diagram under the entry Recombination, the universe was just about 400,000 years old when it became transparent. Our local universe is already 13.7 billion years old (left edge of the diagram above).

The Distance information of distant, astronomical objects contain great uncertainties. That is why astronomers resort to cosmological redshift z back. It is much easier to determine and less prone to error than distance. The astronomers measure redshifts spectroscopically (spectro-z) or photometric (photo-z). Here are a few milestones in cosmology:

With this information you can cosmography operate: you get a map of the large-scale structure of the universe. This is what astronomers have in the survey, for example 2dF done. They used the Anglo-Australia-Observatory (AAO) in Australia and determined the spectra of almost 250,000 objects. For the most part, these were galaxies, all of which together cover around 1500 square degrees of the sky. The following picture shows a result of 2dF, which shows very nicely the large-scale structure in Komos. It is the spatial distribution of galaxies in a fan-shaped section of the sky (Credit: 2dF Galaxy Redshift Survey, 2003; large version): 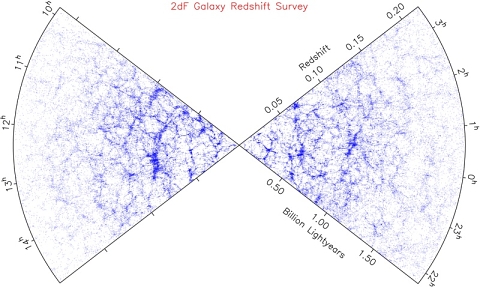 Every blue point is a galaxy! In total, this section shows almost 63,000 galaxies. The earthly observer sits at the intersection in the middle of the picture. The further you move to the edge of the fan, the higher the redshift and distance - maximum z ~ 0.2. Both dates were given on the right of the axes. The time is an indication of the angle of the position in the sky. As you can see, the distribution of the galaxies is not even and homogeneous, but very irregular. This photo reveals one honeycomb structure, which consists of individual galaxies, galaxy clusters and super galaxy clusters at the nodes of the honeycombs. Inside the honeycomb there are huge 'empty spaces' that Voids. The irregular distribution is mainly a result of gravity, because it causes masses to attract and clump together over time. As shown in the entry Dark Matter, the clumping of dark matter (increasing towards small redshifts) could recently also be directly observed.
The picture also shows that as the redshift increases, fewer and fewer blue dots can be seen. This is essentially an instrumental effect and not a cosmological one: the further away the galaxy is, the more the brightness decreases, so that many galaxies simply cannot be observed in the survey. The aim of such studies is therefore to improve the observation technique to such an extent that astronomers can look deeper into space (to even higher z), so that the large-scale structure can also be studied there.

Experimentally one can gain access to the important astronomical quantity Redshift by detecting spectra (Spectrography) and identified known spectral lines there. The astronomer Maarten Schmidt interpreted the emission lines of the in 1963 in this way Quasars as lines of particularly high redshift, so that quasars (then as now) are among the most distant objects. Due to the great distance, the spectra of active galactic nuclei (AGN) are particularly relevant because they can still be detected at all due to their enormous luminosity. Particularly characteristic and easy to recognize in these objects is the Lyman edge of hydrogen (Lyman-α, Lyα). Due to the cosmic expansion, this edge is shifted towards the red end. If one compares this observed wavelength with the laboratory wavelength, i.e. the wavelength in the terrestrial laboratory at z = 0, the quotient just provides the redshift factor G and thus also the redshift z.