What is bacterial endotoxin

An infection is an exceptional situation for our body, especially a severe infection like sepsis. Normally our body effectively shields itself against bacteria, viruses and other pathogens so that they do not get any access to blood or tissue. But when natural barriers such as the skin are broken, pathogens can penetrate the body. In the case of sepsis, the bacterial invaders or the toxins they produce leave the original focus of inflammation, for example a cut on the hand, and spread through the blood throughout the body. A violent immune reaction develops that gets increasingly out of control. Therefore, the earlier sepsis is detected, the better the chances of fighting it.

Lipopolysaccharides, LPS for short, play a key role in this excessive immune reaction. These molecules are important components of the cell membrane of Gram-negative bacteria such as Salmonella, Escherichia coli or Legionella. LPS are released during the cell division of the bacteria, when the immune system attacks the bacteria or during treatment with antibiotics. During sepsis, extremely high concentrations of LPS, also called endotoxins, are released. The human body recognizes this as an enemy and initiates a multitude of defense and inflammatory reactions. The cells of our immune system produce messenger substances in a violent, uncontrolled reaction. There is a huge storm of messengers. One organ after another fails. The result is septic shock.

How Aspidasept works: The small peptides bind the inflammatory bacterial toxins (lipopolysaccharides, LPS, or lipoproteins, LP). Neutralized in this way, the toxins can no longer bind to cells of the immune system. An excessive release of messenger substances and thus the development of sepsis is prevented.

Not the bacteria, but their toxins are fought

Previous therapeutic approaches with antibiotics attack the bacteria directly, but at the same time promote the release of endotoxins. “The fact that antibiotics, of all things, which are used to treat sepsis, promote the release of LPS is the real crux of the story,” says Professor Klaus Brandenburg from the Borstel Research Center. This gave the infection researcher an idea: why not neutralize the inflammation-causing endotoxins instead of the bacteria? Together with a team of scientists and numerous cooperation partners, he went on a search: “We wanted to find an active ingredient that can bind the dangerous endotoxins.

As a result, these structures remain undetected by the immune system. They are rendered harmless and an excessive immune reaction and its consequences are prevented. " 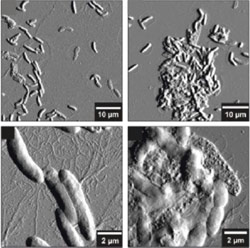 The effect of Aspidasept on salmonella under the atomic force microscope. Left: Salmonella without active ingredient. Right: Salmonella in the presence of Aspidasept. The bacteria clump together massively and flow out. As early as the 1990s, scientists found sections in proteins that have precisely this binding function for the LPS. With funding from the Federal Ministry of Education and Research (BMBF) in the funding priority “Innovative Therapy Processes”, Brandenburg characterized these small protein segments of 20 to 50 amino acids, produced them artificially and modified them so that they are able to cope with the flood of endotoxins in the event of sepsis neutralize. “We had to produce peptides, i.e. short proteins, that fulfill several functions at the same time: First, they have to be positively charged in order to be able to bind the negatively charged LPS with high affinity. Second, to respond effectively, like the LPS, they must be amphiphilic. That means they have to be soluble in both water and fat, ”explains Brandenburg. In fact, it was possible to develop this new class of active substances.

“Our peptides are able to neutralize bacterial toxins directly and broadly, that is, regardless of the type of bacterium. We call them synthetic anti-LPS peptides, or SALP for short. Its heart is the LPS binding site, which we have called Aspidasept, ”says Brandenburg.

The first preclinical studies with Aspidasept have already been successful: With the patented substance, the scientists succeeded in treating sepsis in an animal model in combination with antibiotics. "This makes the peptide a very promising new therapeutic agent against sepsis," says Brandenburg. Further toxicological investigations and clinical studies are currently being planned. It will be a few years before Aspidasept is available for the treatment of sepsis. To develop the active ingredient, he founded a company from the Borstel research center, the Brandenburg Antiinfective GmbH.

Peptides turn out to be "multi-tasking"

Studies with Gram-positive bacteria have shown that the peptides are more versatile than initially thought. The cell wall of these bacteria is constructed differently than that of the Gram-negative. It is not lipopolysaccharides but lipoproteins that trigger the inflammatory reactions in them. “We have seen that Aspidasept can also bind some lipoproteins effectively. We are therefore optimistic that sepsis caused by Gram-positive bacteria can also be treated with our peptides. ”But the peptides can do even more. In addition to their antibacterial effect, they can also stop various viral infections in laboratory experiments. "The mechanism of action here is different from that against bacterial toxins," explains Brandenburg. “This double function opens up the possibility of using Aspidasept in the event of a superinfection.” First of all, a viral infection weakens the immune system. A more serious illness only occurs after a second bacterial infection. “That was the case, for example, with the 'Spanish flu' in the 1920s. People contracted the flu virus, but eventually died of bacterial sepsis. Aspidasept could help here as a peptide with both antibacterial and antiviral effects. ”With this new class of active ingredients, are the classic antibiotics about to be replaced? "Certainly not! In the direct fight against bacterial pathogens, antibiotics are still more effective and will remain so, ”emphasizes Brandenburg.

The “World Sepsis Day” took place on September 13, 2014 for the third time. The fight against sepsis is a major concern of the Federal Ministry of Education and Research (BMBF). In the past ten years, research projects specifically on the subject of sepsis have been supported with more than 70 million euros. Institutional funding from the BMBF also makes important contributions to sepsis research: For example, the German Center for Infection Research (DZIF) is researching infections caused by antibiotic-resistant bacteria and developing new anti-infectives, i.e. drugs to combat infectious diseases. Antibiotic resistance is a current topic that is also gaining more and more importance internationally. Germany is therefore involved in the pact against antibiotic resistance: nationally in the German Antibiotic Resistance Strategy (DART) and internationally in cooperation with the World Health Organization (WHO).