Why is Donald Trump going to Mexico

The border wall with Mexico

It was one of Donald Trump's key election promises in 2016: He wanted to build a wall along the border with Mexico - and the neighboring country would pay for it. In the current election campaign he repeated on a visit to the border town of Yuma, Arizona in August: "Mexico will pay for the wall."

In implementing his plans, Trump faced political and legal resistance. The dispute between Congress and the President over the financing of the wall led to the longest budget freeze, the so-called shutdown, in US history between the end of 2018 and the end of January 2019. Ultimately, Trump reallocated billions of dollars from the budget to defense. A US court then banned Trump from using certain parts of the defense budget. The mostly conservative Supreme Court, however, gave the green light for the time being.

Conclusion: So far the wall has been built at the expense of the USA and thus the taxpayer. Around 15 billion US dollars were made available for financing from funds from the Department of Homeland Security, the Department of Defense and a special fund. This is what it says in a situation report by the US Customs and Border Protection Agency (CBP) dated October 16, which Deutsche Welle has received. This is what it looks like, the border fortification long requested by President Trump

The question remains: how much of the wall is there now? In total, the border with Mexico is 3,144 kilometers long. The situation report shows that almost 600 kilometers of border fortifications have been built since Trump took office. By the end of the year there should be 724 kilometers, according to the Homeland Security Ministry.

It is worth taking a look at the details here: According to the management report, outdated or dilapidated border fortifications were replaced on 524 of the newly built kilometers. Only 72 kilometers were built in places where there were previously no barriers. Of this, 25 kilometers are so-called "primary walls", that is, which are directly oriented towards the Mexican side, and 47 kilometers are "secondary walls" that stand as secondary protection behind the first barrier.

The border protection agency CBP always speaks of a "wall". However, this is not a concrete wall, as Trump originally imagined, but mostly a high metal fence. In office, Trump relativized his claims to the wall. "It won't be a concrete structure over 2,000 miles from sea to sea. It will be steel barriers in top priority locations," he said in 2019.

"America First" was Trump's central election campaign slogan in 2016. The US should come first, be it politically or in economic relations. Trump called the North American Free Trade Agreement with Canada and Mexico (NAFTA) a "disaster". He also denounced that the trade deficit with China is too big.

First about trade: NAFTA terminated Trump. After a long struggle, the slightly modified successor agreement, the "US-Mexico-Canada Agreement", USMCA for short, came into effect in July 2020. The move away from the so-called Trans-Pacific Partnership (TPP), in which Pacific countries such as Mexico, Peru, Chile, Japan, Canada, Malaysia and Australia have come together, went much faster. Three days after his inauguration, Trump signed a corresponding decree to exit.

A thorn in Trump's side was Trump's trade that the United States imported more from China than the United States exported to the People's Republic. But under his presidency, the trade deficit widened, according to figures from the US Census statistics agency. It rose from just under 347 billion US dollars in 2016 to 375 billion and 418 billion in the following two years.

In 2018, Trump forced a trade dispute with China that resulted in mutual punitive tariffs. In 2019, the deficit was back at the level it was when he took office. There are currently signs of a reduction. Until August 2020, the decifit this year is significantly lower than in the same period of the previous year. Analyzes show that both states are suffering from the trade dispute.

There was also a dispute with the EU, sparked by subsidies for the European aircraft manufacturer Airbus and the US brand Boeing. Punitive tariffs followed, for example on European Parmesan or wine, some of which are still intact.

The "America first" attitude has not only affected trade, however. Trump also questioned other contracts or membership in international organizations that are allegedly not beneficial for the United States. The US left the World Health Organization (WHO) amid the coronavirus pandemic, left the UN cultural organization UNESCO, turned its back on the UN Human Rights Council and withdrew from the 2015 Paris Climate Agreement. 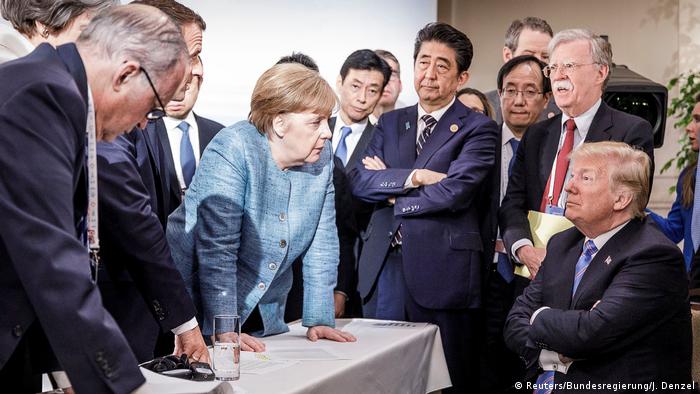 Trump also repeatedly questioned the North Atlantic defense alliance, NATO, and called on member states to make a higher contribution. NATO Secretary General Jens Stoltenberg said a year ago that European members and Canada would spend around $ 130 billion more between 2016 and the end of 2020.

Trump has largely kept his word on many points. From his point of view, he put the interests of the United States first - whether he was doing his state a favor is another matter.

Donald Trump presented himself as a good friend of Israel during the election campaign: He promised to move the US embassy from Tel Aviv to Jerusalem and wanted to mediate between Palestinians and Israelis.

Donald Trump kept his word on this point: Despite the criticism from the Arab side, for example, Trump recognized Jerusalem as the capital of Israel and moved the US embassy from Tel Aviv to Jerusalem in May 2018.

Trump has also brought closer ties between Israel and the United Arab Emirates, Bahrain and Sudan in recent months. In return for the deal, Israel's Prime Minister Netanyahu pledged to suspend the annexation of territories in the occupied West Bank, but not to stop it.

The Palestinian Authority sees itself as the loser of these diplomatic agreements, in which it was not involved. She fears that her quest for a two-state solution will increasingly lose support in the Arab world. Incidentally, the USA stopped payments to UNRWA, the UN aid organization for Palestinian refugees, in 2018.