What do you think of immigrants

Integration and sport: through multiculturalism to success

Sport unites people from a wide variety of backgrounds. In professional sport in particular, it becomes clear that heterogeneous teams are particularly successful.

The pitfalls of multiculturalism are sometimes in the details, or rather: in the coin slot of a shopping cart. Eight-year-old Miroslav Klose learned that in front of his first German supermarket. “I didn't know how to get the car. I didn't see that you have to put a euro in. I stood a little further away and watched exactly how the others were doing. "

Even if in the eighties it was actually still a D-Mark and not a euro that opened the door to the consumer world - the young immigrant and later player of the German national soccer team learned early on to master his difficulties abroad with a sporty, alert eye.

Football as a door opener

Later, football in particular opened the door to his new home in Germany - in the SG Blaubach-Diedelkopf club, for which he played from the age of nine to the age of 21 and for which he scored 71 goals - more than anyone else.

The experience in front of the supermarket was one “that I will not forget,” described Klose almost 30 years later, as world champion and record scorer at the World Cup, when he received the “Golden Victoria”, the award for integration in Germany, from the Deutschlandstiftung Integration in Berlin , received. "You are a wonderful role model for the ability to live well together in everyday life," said Chancellor Angela Merkel. "You prove that Germany is your home and that you are proud of your Polish origins at the same time." 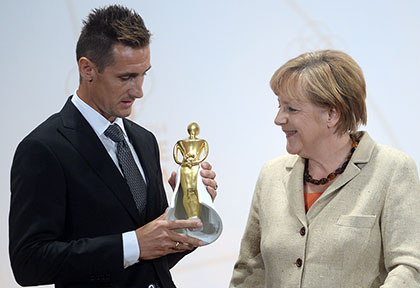 Sport is banal and important at the same time

How much does sport help with this balancing act? A general answer is difficult. Because sport has two sides: it is banal and important at the same time. On the one hand it is an important part of everyday life for many people, on the other hand it is celebrated for bringing different cultures together. One thing is certain: as is usually the case in the field of music, very different people come together in sport. Sport creates equal opportunities, because the differences in education, origin or language of the athletes are irrelevant here. It's not for nothing that a game, a match or a final is called an encounter.

"Of all cultural assets, sport has the most common cross-cultural features," said the German Olympic Sports Confederation (DOSB) in 2006. But the integrative effect of organized sport is not a sure-fire success. While the Federal Statistical Office found a migration background for around 20 percent of people living in Germany in the 2013 microcensus household survey, according to the DOSB's 2013/14 sports development report, this only applies to around six percent of members in German sports clubs, with a downward trend compared to the previous report .

There are a number of award-winning success stories of sporty, multicultural projects. A good example is the club “MitternachtsSport”, which soccer world champion Jérôme Boateng, son of a German and a Ghanaian, co-founded in his hometown of Berlin for street children with roots in many countries.

"Sport is not integrative per se"

Where there are fewer celebrities and more problematic everyday life, things often look less rosy. In addition to multicultural clubs in which people from dozens of nations play sports together, there are numerous clubs organized according to ethnic origin, especially in lower football leagues, in which immigrants stay among themselves. The DOSB study Sport and Immigration stated: "Sport does not have an integrative effect per se."

In the professional leagues you are further there. There football has long been a mirror of the immigrant society and the professional football player is someone who is at home all over the world and who works in football clubs that are multinational and multicultural. These include national teams, such as the French national team, which became the first world champion in 1998 with players from five different continents. The German national team was also celebrated as the 2014 world champion for its ethnic diversity. Federal President Joachim Gauck saw in this team and their internal sense of togetherness "the very natural reflection of the immigration society".

The stranger becomes one of us

This beautiful idea has a very pragmatic side in the thinking of top-class sport - it helps to win. Because a team in which footballers of different origins play has a broader playing culture and is generally more successful. Professional football is thus a pioneer for the acceptance of immigrants in society: Here immigrants are not seen as people who take something away from us, but as people who give us something. The stranger who helps my team is no longer a stranger, he becomes one of us.

Christian Eichler
is a sports correspondent for the "Frankfurter Allgemeine Zeitung" and has published several books on football.