Should NCAA players get paid

Living an independent, carefree and prosperous life through American football is the dream of many young Americans. But the road from high school to university to a professional contract is long and hard. And until the first paycheck is paid, the players are kept an eye on the fingers. Strict rules determine the everyday life of the Student Athletes.

Josh Huff just wanted to celebrate his birthday with friends. The 22-year-old is a senior at the University of Oregon at Eugene and one of the stars of the university's American football team. A few days before his planned birthday party he announced via Twitter that it would have to be canceled: “Sorry folks, I can't celebrate my party because of the NCAA. Sorry for the inconvenience! My party is canceled. ”Because Josh Huff had collected a small amount from his guests to cover drinks and food costs - as is quite common in the USA - the college sports association canceled the party without further ado. College athletes are not allowed to make money. The NCAA (National Collegiate Athletic Association) had too great a chance that Huff could have made a profit from the money raised. So he complained about his suffering on the social network: “So it's okay for the NCAA to make money with my name, but as soon as I charge entry fees for my party, is it a problem? Crazy."

In addition to his studies at the University of Oregon, Josh Huff played as a wide receiver American football in the top college league for the Oregon Ducks, the team at the university. Huff's last season was over for four weeks. He's hoping to be picked by a pro team in the NFL Draft in May. (Image: Michael Arellano, Emerald Media Group)

Josh Huff has been reprimanded by America's most powerful student sports association. It is not an isolated incident.

The NCAA oversees the largest sports played at American universities, including volleyball and athletics, the two giants basketball and American football. The media and audience interest in these is huge, the ratings and audience numbers are often higher than in the professional leagues NBA and NFL. Jerseys, shirts and other fan merchandise are sold in fan shops run by college teams, ticket prices for Division I college football games are in the high double-digit range, and television stations pay billions for TV rights. The NCAA rakes in real money with it. But what happens to this money that the association, as described by Josh Huff, earns with the performance of the athletes?

The NCAA presents itself as a non-profit organization. The attractive sports American football and basketball supply the association with amounts in the billions ($ 10.8 billion for the TV rights to the NCAA Basketball March Madness, the college playoffs). Only they bring profit. With this, smaller sports are financially supported. At least that's what it says on the association's website. At the same time, the NCAA stipulates that college athletes must not make any money, otherwise they will be considered professionals. On paper, college sports has always been an amateur business - hard to believe when you see the blooming merchandising, sold out stadiums and soaring TV monies today.

Just like in the professional field, fans adore the players. They identify with their idols. The difference: The name of a player may not appear on any college team jersey sold, only the jersey number allows an assignment. The same applies to the video game variant of American college football, NCAA football. Not a single player name is present in the game, for example Josh Huff of the Oregon Ducks is loveless in the game as the No. 1 shown. Why so impersonal?

The athletes have no right to their own name as long as they are enrolled in a university and are playing NCAA sports. You are therefore not allowed to earn any money with your name, which would be the case if it were on a jersey or even appear in a video game. It's just strange that in the NCAA online shop at times the jersey number lit up on the screen by entering a player's name using a search function.

The NCAA makes strict rules and doesn't adhere to them itself. And the restrictions go further. Dominic Artis and Ben Carter play basketball for the Oregon Ducks in the top college division. Prior to the season, they sold some of their university-provided basketball shoes on the internet for a total of $ 1,800. The NCAA got wind of it and banned Artis and Carter for the first nine games of the season. 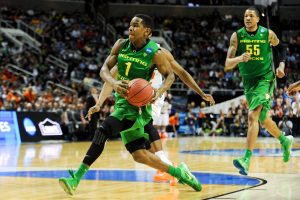 Dominic Artis on the floor for the Oregon Ducks. The green outfits including the shoes are specially made by Nike for the Ducks basketball team. (Image: Archives, Emerald Media Group)

In another example, college football superstar Johnny Manziel of Texas A&M University signed 4,400 autograph cards for a broker. Manziel is the figurehead in American college football, winning the Heisman Trophy in the 2012 season, the highest individual award for a college football player - in his freshman year. From the NCAA's point of view, this was also an offense, as the number of autographs suggested a commercial purpose. It could not be determined whether the athlete received any money for it. Manziel got away with a comparatively mild suspension. He was not allowed to be on the field for the first half of the first game of the season in 2013. Conclusion: The NCAA protects its stars because they ensure quota, are figures of identification and bring money - even to a non-profit organization.

College athletes find themselves in such situations again and again. Most of them, especially in basketball and American football, are full scholarship holders at their universities and integrated into expensive athlete programs. You enjoy the advantages of paid training including supervision, accommodation and meals - in step with the daily double burden of studying and sport. And yet they are cannibalized by their association, which makes millions every year by selling posters, jerseys and video games. This is how Josh Huff and many of his colleagues feel. "College athletes should be treated like a full-time job," says Huff, who also emphasizes that he is grateful for his scholarship.

This is where the great debate about college athletes' compensation comes in and raises many questions. Is a scholarship enough payment or just justified because the athletes with their busy schedules have no opportunity for an additional job to finance their studies? Who would pay the athletes? Do they all get the same performance, regardless of whether they play regularly or are only the fourth substitute in their position? Shouldn't the 98.3 percent of football students who fail to make the leap to the pros get a share of the millions their university makes from them?

American scientists have calculated that the hourly wages of student-athletes in the form of a scholarship are between $ 3.51 and $ 20.37, depending on the amount of tuition at their university. No comparison to the wages of the professionals, but a payment. In addition, the most promising talents (less than 1 percent of all college football players) receive underhand monthly payments from sports agents as a kind of advance payment for their future professional careers. 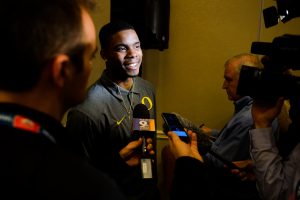 College athletes, especially in basketball and American football, are the permanent focus of the media. Like a professional, Josh Huff had to regularly answer questions from the media after training before he could devote himself to his university assignments. (Image: Michael Arellano, Emerald Media Group)

Conflicts can arise when it comes to who should pay. Universities have different budgets, not all of them have a financially strong sponsor behind them, such as the University of Oregon in the person of Nike founder Phil Knight. Not to mention the fact that a regular may ask for more wages than reservists. There are shouts that the NCAA and professional associations should pay for the payment as they benefit from the athletes on a large scale. Universities and leagues also make money from their student-athletes.

Josh Huff receives an hourly wage equivalent to less than four dollars. He does not understand why the NCAA does not invest the money it receives because of its performance in the payment of athletes or why he cannot live the student part of his college-athlete existence without restrictions. On one point, however, the association is powerless. He can prohibit Huff from the planned private party, but not the right to freedom of expression, which is also part of student life. In any case, with the ban on the birthday party, the NCAA started an endless discussion. A party for Josh Huff's birthday finally took place, but not privately organized by him, but publicly.

Things could get easier for Josh Huff in the future. He recently graduated from the University of Oregon as a senior. For him as a top player on the football team, the door to the NFL professional league is now open. Then with your own wages. Then with the right to one's own name. And then also with the right to have your own birthday party.