back to the homepage

Subtitles are an important tool for the severely hearing impaired to follow the action in films or to understand the text of spoken messages. Even moderately hard of hearing people find it difficult to watch television, for example, if background music or street noise can be heard in addition to the language, and they can benefit from subtitles. In the following, some aspects will be dealt with more or less comprehensively.

definition (Quote from Wikipedia (German), as of September 2011):
"Subtitles (UT) denote lines of text that are below or next to pictures to provide written information about what is shown. Examples are comments under magazine photos or under the images in this Wikipedia article. In a film or a television picture, subtitles are usually on faded in at the bottom in order to translate spoken content from a foreign language or to make it accessible to the hearing impaired. In most countries, foreign-language films are usually subtitled instead of dubbed for cost reasons. Subtitles for the deaf and hard of hearing also describe the linguistic content as well as the language Ambient noises, e.g. with the note 'quiet music' ".
(The term "subtitles" is also used in connection with book or film titles and should not be considered here.)

Standards for subtitles as used by ZDF and its partners can be found here (as of March 2017)
Logos to mark offers with subtitles for the hearing impaired:
Up to now (as of 2011), the crossed ear as a symbol for programs with subtitles has been used as a symbol in program overviews or magazines.
In coordination with other associations, the German Deaf Association has developed a new symbol that shows the letters UT on a stylized television screen.
The reason for the development of the new symbol is that subtitles are sensible and useful not only for the hearing impaired, but also for everyone (detailed explanation, pdf, approx. 1.8 MB). However, this means that the non-verbal pictogram information is lost for those in whose national language UT is not used as an abbreviation for subtitles. 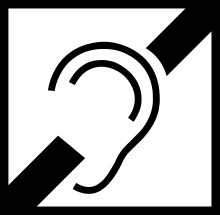 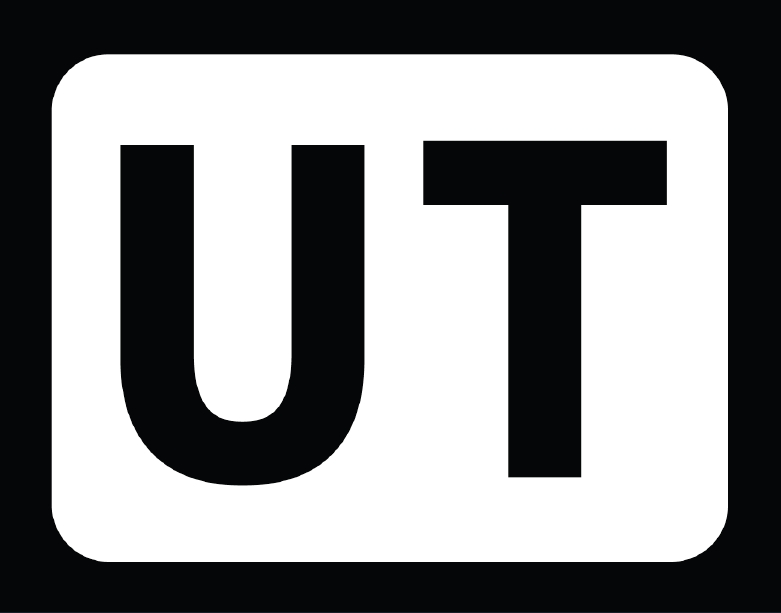 Left: The old symbol for subtitles suggests "Only for the hearing impaired"
right: The new symbol for subtitles is more general
Arguments for subtitles (not only for the hearing impaired) can be found under against-dubbing.
The argument is made with, for example:
"Synchronization falsifies content - authenticity, jokes and cultural associations are lost."
"A multitude of unique dialects are being lost - even British and American English are worlds apart."
"Subtitled films promote foreign language skills and reading skills."
Argument against subtitles is, for example, the disruptive effect during a film showing or television broadcast. It's just strange that the inhabitants of countries in which the films are not dubbed (Denmark, the Netherlands, Norway, Sweden ...) are not bothered by it ?!
If you find subtitles annoying, you should, conversely, watch a TV program without them and without sound - then you might be convinced of its usefulness after all.

prism
Programs can be searched for up to four weeks in advance (on a daily basis).
SRF subtitle overview
The Swiss broadcaster also lists the current programs on German television programs.
TV for Everyone, an inclusion project of the non-profit Sozialhelden e.V. in cooperation with the media companies, VAUNET, ARD and ZDF. It can also be filtered for posts with audio description.
TVButler
Here, for example, "Sign language" or "Original with subtitles" can also be selected as a special search.
A combination of the special search with the genres is unfortunately not possible; Research is carried out either in the special search or in the genres (depending on the box in which the display button is pressed).

http://viki.com
An overview of the contributions with German subtitles can be found at https://www.viki.com/explore?type=film&language=de. If necessary, you can also filter by genre.

Overview of the teletext tables for programs with subtitles (subtitles) on individual television channels in abbreviated form
(For detailed information (including foreign stations that broadcast in German) with links to the homepage, email and fax contact for quick contact in the event of malfunctions, see here):

Digital subtitles
The requirement for receiving subtitles via DVB-S, DVB-C or DVB-T is that the receiver used supports the "DVB-Subtitle" standard. If the receiving device supports this globally common technical standard, the subtitles can be called up simply by pressing a button on the remote control of the receiver.
Channels that offer DBV subtitling (as of October 2018):
Germany:
3Sat
ARD (and offshoot)
Cable 1
NITRO
Phoenix
RTL
RTL II
SuperRTL or SRTL
Vox
ZDF
ZDF info
ZDF neo
Austria: ORF one; ORF 2, ORF III
Switzerland: SRF 1, SRF 2

Lindenstrasse
At http://www.lindenstrasse.de there is the possibility to watch missed or earlier programs on the Internet with subtitles
To do this, select the last one (or an earlier one) under "Follow" on the left and then "Go to video" on the right. After switching on the video, you have the option of displaying the subtitles using the (old) subtitle symbol at the bottom right.
(This is just a coincidental find - please report other possibilities to the homepage supervisor so that they can be included here.)

Films with subtitles in the cinema

Films with subtitles are rare in German cinemas than in smaller countries, where dubbing is not economically viable and subtitles are used instead. Films without synchronization, which are made understandable for the German-speaking audience via subtitles, are usually recognizable in Germany via the abbreviation OmU (OmU = original with subtitles).

Local offers for films with subtitles in the cinema
February 21 to 28, 2013 (Thursday to Thursday)"Everywhere - The inclusive film festival of Aktion Mensch".
"Hardly anything is more exciting than people themselves - to watch them and talk about them. The six films from" Everywhere ", the fifth film festival of Aktion Mensch, make people themselves a topic: How do we communicate, how do we take them World true, how do we overcome often the same hurdles with different skills? But also: How do we develop, how do we change ourselves and our society? "
This film festival "is unique in Germany because it is comprehensively barrier-free: It provides audio descriptions for the visually impaired, subtitles for the hearing impaired and a special soundtrack for the hearing impaired and hearing aid wearers for the films and accompanies the subsequent discussions with sign language interpreters for the deaf and text interpreters for This is how Aktion Mensch, with its film festival, practically implements inclusion and enables people to be part of the festival everywhere. "
The films will be shown in Erlangen from February 21 to 28, 2013, location: E-Werk (Fuchsenwiese 1). The program for Erlangen will be available here from the end of January.

vhs Club international
The vhs Club international, which is part of the adult education center in Erlangen, offers, among other things, films in the original with German subtitles. "Films in original version. In the series:" Filmworlds in the vhs Club INTERNATIONAL ", films are shown in their original version, usually with German or English subtitles. Native speakers or experts from the various regions will present the films to you You background information worth knowing. "
This offer is of course also of interest to the hearing impaired. The demonstrations take place in Friedrichstr. 17 on different dates at 7 p.m. The visit is free of charge.
By clicking on the U number of the program you can find out about the content of the films on offer; the detailed program can also be saved as a pdf file, for example here (October 2012 to January 2013, pdf, approx. 5 MB).

In Nuremberg and Bamberg, films are regularly shown in the original language with subtitles. Nuremberg: s.
Bamberg: s.

Movies with subtitles on DVDs and Blu-ray discs

The range of films on DVDs and Blu-ray discs looks better; here, subtitling is often (but not always) offered for the hearing impaired, or at least German-language subtitles are offered as standard. For this it is of course necessary that a DVD or Blu-ray player is available or can be used.

International film offer on the Internet with subtitles:

http://viki.com
At http://de.viki.com/channels?category=movies&sort_by=featured you can find a selection of films that can be viewed on the Internet. They are often provided with subtitles (not specifically for the hearing impaired). German is only one of many languages ​​that can possibly be displayed. The selection of German films (via the country selection on the right) is comparatively small with 16 compared to the Asian ones (India 99, Thailand 64, ... as of December 2011), but maybe something is interesting among (from a German point of view) rather exotic titles with ...
Films with full German subtitles (these are preset by "de."), Among others (as of December 2011):
Love in Magic:
The plot of "Love in Magic" (German: Love in Magic): Woo Ji Hoon is a well-known magician and a womanizer. He lives in Seoul and for him this city is both a stage and a hunting ground. When he has just made a new "acquaintance", his past catches up with him in the form of a sex video. Otherwise the star in the spotlight would like Ji Hoon, reluctant to see this testimony of his skills in public. Worried that his ex might make headlines by going to the police, he sets off to find her. But first he has to remember her name, Tae Hee, So Jin, Bo Ra, whatever ...?
http://de.viki.com/channels/6245-love-in-magic
An overview of German (planned and completed) subtitles can be found at: http://de.viki.com/channels/1260-searching-for-subtitles?t=1323713987
The overview at the bottom of the page indicates the status of the processing, e.g. black text underlined: in progress (or is still incomplete); white text shaded black: completely translated, etc.
Only the titles marked with "Featured" are freely accessible.
Information and details about viki.com can be found (only in English, as of December 2011) at http://en.viki.com/channels/3091-viki-first-aid
We would like to thank a female fan of viki.com (who did not want to be named) for the information!

back to the homepage